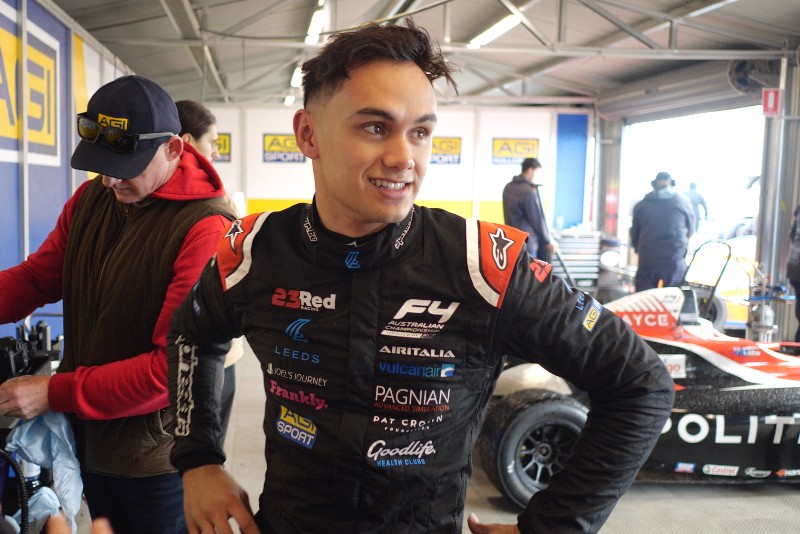 AGI Sport?s Luis Leeds secured the first title of his career in the Australian Formula 4 season finale at The Bend Motorsport Park.

Team BRM?s Lochie Hughes and Ryan Suhle each took pole position in a wet qualifying session for the first race of rounds five and six respectively, with Leeds joining them on the front row.

Championship leader Leeds led the way in race one on Friday, and finished 1.6277 seconds ahead of Suhle, who had started in sixth. Poleman Hughes finished 23.6606s back in fourth. Emerson Harvey kept his fifth place finish despite a penalty for exceeding his grid slot.

The rain continued on Saturday but it didn?t stop Hughes taking the race two win by just a few tenths from Suhle, while Leeds was eight seconds back in third. Harvey made a poor getaway from the front row and was unable to recover from seventh.

Race three was drier, and produced a dramatic finish as Patrizicorse?s Jackson Walls took his maiden victory after Hughes was given a five-second penalty for contact earlier in the race with Suhle. Walls had initially missed out on the win after being outbraked by Hughes. Leeds? third place finish was enough for him to secure the title with three races to go.

Hughes was victorious in the fourth race of the weekend by 0.6984s over Leeds, and two further podium finishes were enough for him to finish the season as runner-up, 99 points behind the former Red Bull junior.

Leeds dominated races two and three to finish the season with nine wins, one at every circuit, to his name. Suhle was second in race two, with Antonio Astuti taking third in race three.

The former Red Bull junior is now looking to race in Europe in 2020, and in particular the FIA Formula 3 Championship.

Despite the conclusion of this year?s Australian Formula 4 Championship, further details will soon be announced regarding Australia?s entries for the inaugural Formula 4 Asia Pacific and potential FIA Motorsport Games.