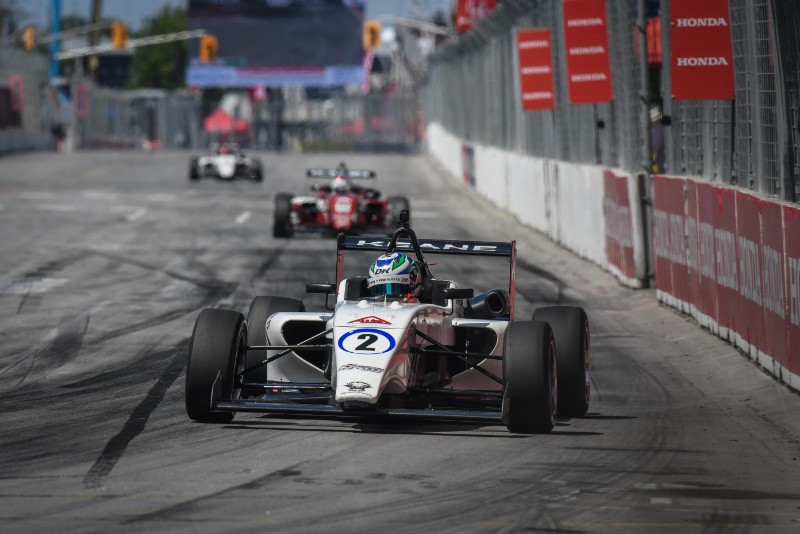 Darren Keane and Christian Rasmussen were the two USF2000 winners at Toronto, but Braden Eves still holds the championship lead.

Cape Motorsports’s Keane and Jay Howard Driver Development’s Rasmussen both enjoyed their maiden USF2000 victory this weekend, as they locked out the top two spots in both qualifying sessions and each race.

Keane was the first to enjoy the top step of the podium on Saturday after he was able to take the lead from Rasmussen halfway through the race – completing a late-braking move going into Turn 3 -? and hold off the Danish driver’s attempts to take back the place.

He started the second race from pole position, but fell down to third place on the opening lap behind Rasmussen and Pabst Racing’s Colin Kaminsky. Multiple caution periods disrupted the race due to incidents behind the leading three drivers.

Keane had moved back up to second by lap 18 of 25, but Rasmussen was able to create a gap out front. Rasmussen’s advantage was wiped out by a late caution, which set up for a one-lap dash to the chequered flag. Rasmussen did just enough to withold Keane and take the win.

Matt Round-Garrido put in a standout performance for BN Racing throughout the weekend, especially during race two. After finishing the first race in eighth – his joint-best USF2000 result of the season at that point – he was able to claim his maiden podium finish after crossing the line less than a second behind the leading pair.

Exclusive Autosport’s Manuel Sulaiman just missed out on the podium in race two, but was able to keep out of trouble to move up from eighth to fourth over the course of the race. He also came home seventh in race one.

Eves still keeps hold of the championship lead for Cape Motorsport, with Mazda Road to Indy Shootout winner Hunter McElrea also staying in second. After Pabst’s McElrea completed the race one podium with Eves one spot behind, both drivers finished outside of the top 10 in the second race.

Kaminsky also had a tough weekend. After running in second place for most of race two, the Pabst Racing driver ended up crossing the line in 12th spot as the last on the lead lap.