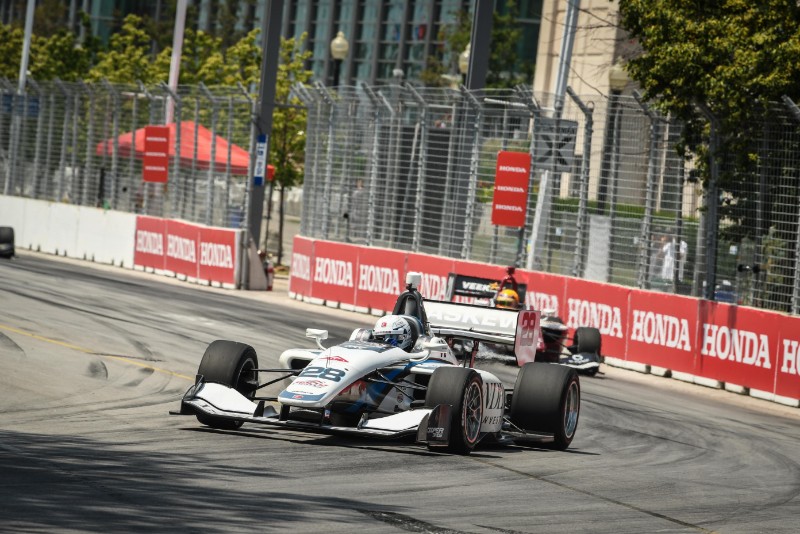 Oliver Askew has extended his Indy Lights championship lead with a win in the second race at Toronto after Aaron Telitz and Rinus VeeKay collided.

The Andretti Autosport driver Askew started from pole, but a slow getaway meant that both yesterday’s race winner Telitz and VeeKay got ahead of Askew on the first lap of 40.

The front three splintered from the rest of the field and kept close to each other during the first half of the race with Telitz leading the way. However, around lap 24, a late attempt to overtake Telitz by VeeKay going into Turn 3 put both drivers into the tyre wall.

The incident elevated the polesitter back into the lead for the rest of the race, with Telitz having to make a pit stop and VeeKay eventually finishing the race four laps down.

Toby Sowery – who was able to take fourth place from Juncos Racing’s Dalton Kellett early on in the race – eventually finished in second place, his best result of the 2019 season since the opening race at St Petersburg.

Kellet completed the podium just under 25 seconds behind Askew but had to hold off Askew’s team-mate Ryan Norman late on. Norman had originally started the race from the back of the pack in ninth.

Telitz – who won the first race this weekend in Toronto – settled for sixth in front of his Belardi Auto Racing team-mate Lucas Kohl and BN Racing’s David Malukas.