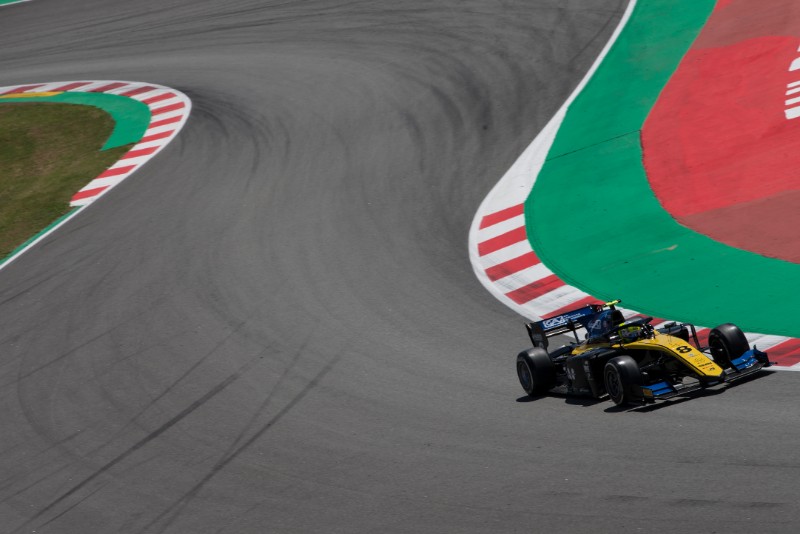 Late set-up changes meant that Ghiotto was late to join the circuit at the start of the session, and his scruffy start to qualifying was underlined when he bounced along the rumble strip at the exit of Turn 9 on his first lap.

Despite vaulting to second place on his second timed lap, Ghiotto complained that his Virtuosi-prepared car was suffering a “misfire” on the first run.

Williams Formula 1 test and reserve driver Latifi set a blistering 1m28.212s benchmark with his final lap of the session to grab provisional pole, despite suggesting that he struggled with “no brakes” on his lap.

Ghiotto was the only driver on track with a chance to deny the Canadian pole. Setting a personal best in sector one and a session best in sector two on his final effort, Ghiotto eclipsed Latifi’s time by 0.181s to snatch top spot with the last lap of qualifying.

Ghiotto’s four bonus points for pole elevates him above Jack Aitken and into second place in the championship standings.

Renault F1 reserve Aitken himself was a candidate for pole, having topped the times after the first runs were completed. Campos elected to run in the gap, meaning that both Aitken and team-mate Dorian Boccolacci completed their second attempts before the rest of the field.

Aitken lowered his benchmark by 0.051s but eventually slipped to fifth place by the end of the session. Boccolacci, who had grabbed a provisional fourth, was shuffled back to ninth as Campos’s strategy ultimately backfired. A clerical error and three-place grid penalty means Aitken will be starting only one place ahead.

Ghiotto’s team-mate and F2 rookie Guan Yu Zhou was one of the drivers who demoted Aitken in the closing stages, and qualified third.

Oscar Piastri moves ahead in Eurocup free practice at Silverstone