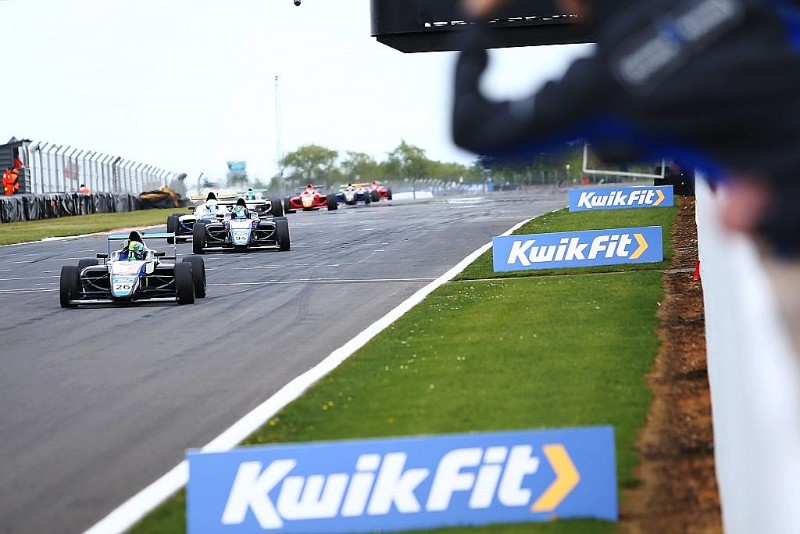 Double R Racing?s Louis Foster took his third British Formula 4 win of the season at Donington Park despite being involved in a last lap collision.

It was a complex race for but poleman Foster, who was passed by team-mate Sebastian Alvarez at the start. He resisted early pressure from Richardson Racing?s Luke Browning and then JHR Developments? Josh Skelton, and with four minutes of 20-minute race left finally went to reclaim the lead.

Foster and Alvarez banged wheels at Coppice, allowing Skelton through. He quickly faded though, just as Carlin’s Joe Turney came into the mix.

Turney passed both Double R cars through Coppice, where Foster also passed his team-mate but then lost the lead into the chicane. Turney then clipped the rear wheel of Foster going into Redgate on the final lap and crashed out of the race.

Foster was able to continue and beat Alvarez by 0.638 seconds. Having also won the first race, Foster now has a 17-point lead in the standings. Turney was less fortunate, as his race concluded in the gravel and he slipped back down to fifth in the points.

Browning, who challenged for the lead off the line despite starting on the second row, finished in third after dropping back slightly in the middle of the race ahead of Skelton.

Race two winner Bart Horsten had a difficult race, clipping his wing on the opening lap. He pitted under the safety car, for a accident involving Arden team-mate Tommy Foster, for a wing change. He recovered to finish eighth despite a lairy moment through the Craner Curves.

Alex Connor concluded his first F4 weekend with fifth, ahead of Zane Maloney, who battled hard with Carlin team-mate Turney earlier in the race.

Carter Williams finished in seventh, with Fortec duo Mariano Martinez and Roberto Faria ? the latter who missed the second race ? rounding out the points finishers.