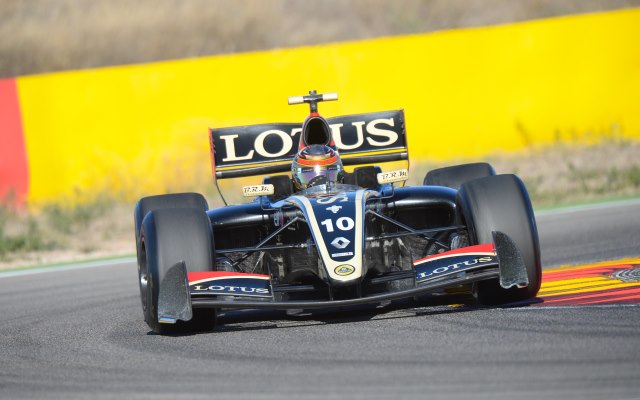 The Lotus Formula Renault 3.5 team has confirmed Marlon Stockinger and Matthieu Vaxiviere as its drivers for the 2014 season.

Vaxiviere revealed his plan to step up from Eurocup Formula Renault back in December, while Stockinger had been expected to remain with the Charouz-run squad for a second year. The Swiss-Filipino finished 18th last year after stepping up from GP3, and went on to top the second day of post-season testing at Barcelona.

“It is really great and positive to be back with Lotus and to prepare together for the upcoming season,” said 22-year-old Stockinger, who will remain as part of the Lotus F1 Team’s junior squad.

“My aim for 2014 is to win races and I will do my best in order to fight for the championship. I have been working very hard during the off-season to be ready for this challenge. I was a rookie last so I made a few mistakes, but now I am more experienced and I will try to make the most out of it.”

19-year-old Frenchman Vaxiviere steps up after testing with the team at the end of last year and replaces Marco Sorensen, who has been linked with a reserve role at the F1 team.

“I am really happy that I was given such a great chance to be a part of this team,” said Vaxiviere, who won twice in the Eurocup at Motorland last year and ended up tenth in the standings.

“I tried out the Formula Renault 3.5 car already last year and I liked the car very much. My goal for the upcoming season is to be best rookie of the season and in the overall standing I would like to finish in the top five.”

Team manager Bob Vavrik commented: “I am quite confident that our team will be strong in every aspect this year. We have been working and training hard during the winter and we did not underestimate anything. Both our drivers have been already testing at the simulator and we will move to the race track as soon as the first pre-season test will take place at the end of February.

“Marlon will race with us for the second season. I believe that he will use the experience he gained during last season and I expect him to fight for victories. Matthieu is a rookie, but he had a very good season in Eurocup Formula Renault 2.0 so we believe that he will be competitive straight away.”

Melker to test for ISR at Paul Ricard