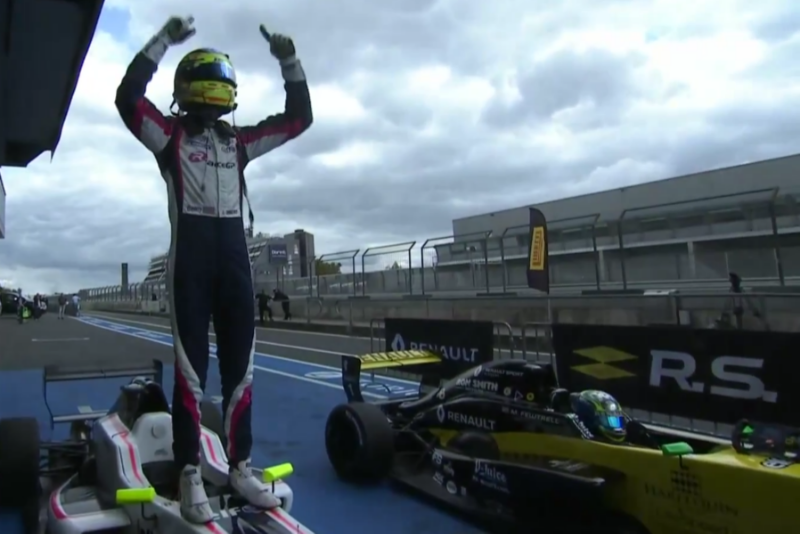 Sargeant won the opening race of the season at Paul Ricard, and has appeared on the podium three times since before taking his second win. The American started the race from pole position, and got off the line quick to lead into the first corner as drivers battled for position behind him.

Yifei Ye headed championship leading rival Christian Lundgaard on the second row of the grid, and tried to pass second placed man Fewtrell at the start. The Josef Kaufmann Racing driver wasn?t able to make the move stick after going wide at the first corner, and the two drivers battled in the next few corners, enabling Lundgaard to calmly pass both for second.

By the end of the first lap Sargeant had an advantage of two seconds to Lundgaard, who was hounded by fellow Renault Formula 1 junior Fewtrell.

From there he hunted down team-mate Sargeant, and a mistake by the leader brought the Englishman into frame for victory. He couldn’t get close enough to make a pass though, and Sargeant took a long awaited second win by 0.682 seconds.

Victor Martins, another R-ace GP driver and Renault junior, finished fourth as a result of Ye losing ground on the first lap after his failed move on Fewtrell. The Chinese driver ended the race in sixth, behind Tech 1 Racing’s Alexander Smolyar. Charles Milesi finished just on Ye’s gearbox in seventh.

Oscar Piastri’s scoring run was ended after being spun out of eighth place by Thomas Neubauer, who inherited the place to take his first points since the fourth race of the season at Monza.

Piastri’s fellow Australians Thomas Maxwell and Alex Peroni rounded out the top 10, while Piastri charged from the back to finish in an eventual 16th place.

The podium battle between the drivers registered for Northern European Cup points was probably the closest of the race, with the ‘class’ lead swapping multiple times and with the top three drivers often split by less than a second.

Doureid Ghattas was the eventual victor, heading Anders Motorsport team-mate Phil Hill. The two Germans are now split by 24 points at the top of the standings. R-ace GP’s Gabriel Gandulia finished just behind them, with ScoRace Team’s Sharon Scolari taking the chequered flag a lap down.