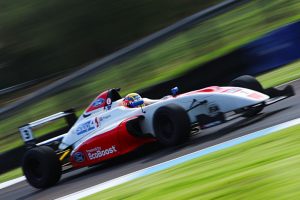 Fortec Motorsports driver Hoggard also took a double pole last time out at Knockhill, and has now topped qualifying on five occasions. Jewiss was only 0.012 seconds behind on fastest times, and an even closer 0.003s behind on the second fastest times that set the race three grid. The Double R Racing driver set 11 timed laps in total, compared to Hoggard’s four.

The only other driver to replicated Hoggard’s strategy was title contender Ayrton Simmons, but the JHR Development driver got caught out by traffic and could only go seventh fastest.

Arden’s Patrik Pasma was third fastest, just ahead of team-mate Jack Doohan, but on second best times they were both bettered by Double R’s Paavo Tonteri, who was fifth fastest on best times.

Josh Skelton beat team-mate Simmons to sixth for the race one grid, but made a mistake on his second best lap and dropped behind Simmons and Arden’s Dennis Hauger.

Championship debutant Christian Lester was the cause of the red flag, crashing his Rosso Verde Racing/Scorpio Motorsport car at Copse with four minutes of the session to go.