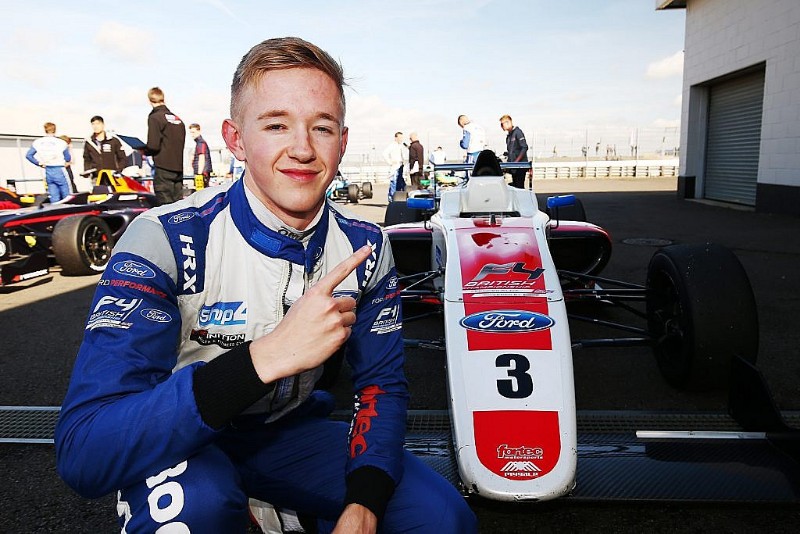 Johnathan Hoggard continued his late season British Formula 4 form with his third win in the last four races in the Silverstone opener.

The Fortec Motorsports driver was under pressure from championship leader Kiern Jewiss throughout, with the gap between the pair running down to two tenths of a second at one point. Running in Hoggard’s dirty air hampered Jewiss though, and the Double R Racing driver had to make do with second place.

He extended his championship lead though, with title rival Ayrton Simmons only climbing one spot from seventh on the grid to finish sixth.

The battle for rookie honours and the final podium place came down to a battle between Red Bull juniors and Arden team-mates Jack Doohan and Dennis Hauger. Doohan won that battle, narrowing the gap between the pair in their dispute over third in the standings.

Their Arden team-mate Patrik Pasma dropped from third at the start to fifth, and ended the race in that position.

The closest battle of the race was for seventh, with JHR Developments’ Manuel Sulaiman holding off Double R’s Paavo Tonteri in a race long duel.

Seb Priaulx gained two points by finishing ninth, but his move on Lucca Allen meant it was the latter of the two who will be starting the reversed grid second race from pole.

Jamie Sharp was the last finisher in 12th, being condemned to the back of the order after an opening lap off.

Josh Skelton span on the first lap then retired, while championship debutants Christian Lester and Rosso Verde Racing/Scorpio Motorsport failed to make the start due to rearend damage sustained from a crash in qualifying.