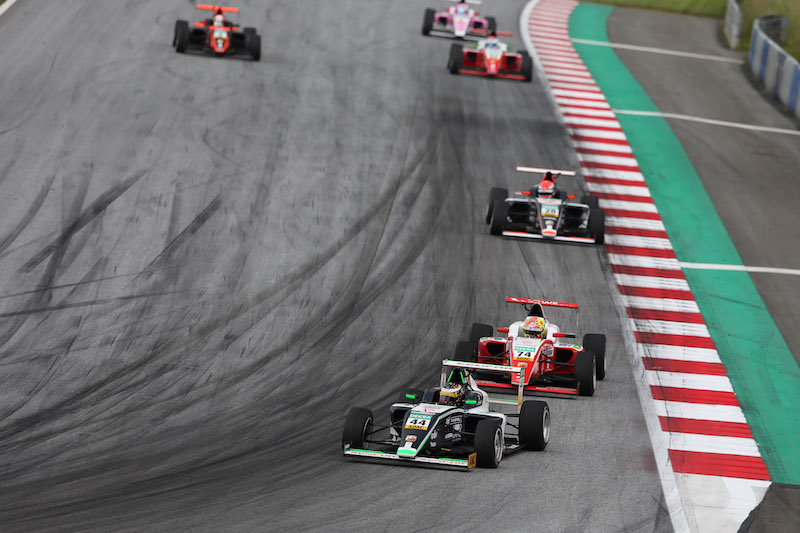 Lirim Zendeli extended his lead at the top of the ADAC Formula 4 standings with victory in the second race at the Red Bull Ring.

The US Racing driver controlled two safety car restarts to take his sixth win of the season.

Zendeli and David Schumacher both got the better of pole sitter Enzo Fittipaldi off the line, with Schumacher briefly taking the lead before falling back to fourth.

Fittipaldi was able to stay on Zendeli’s tail, and spent the race pressuring the championship leader, but couldn’t find a way back past.

After his first victory of the season in race one, the Prema driver had to settle for second, finishing 0.661s behind Zendeli.

After falling behind Mick Wishofer, Schumacher was forced to defend fourth from Charles Weerts. The pair ran side by side before colliding and both were sent into the gravel, bringing out the first safety car of the race.

The second safety car came after Joey Alders slowed to a stop on track.

The second caution period allowed Frederik Vesti to close in on Olli Caldwell, who inherited fourth after Schumacher’s crash. On the restart, Vesti was able to pass Caldwell, but the Prema driver fought back and took the position. The pair continued to battle, allowing Liam Lawson and Niklas Krutten to catch up.

Caldwell held onto fourth, finishing just 0.454s ahead of Vesti.