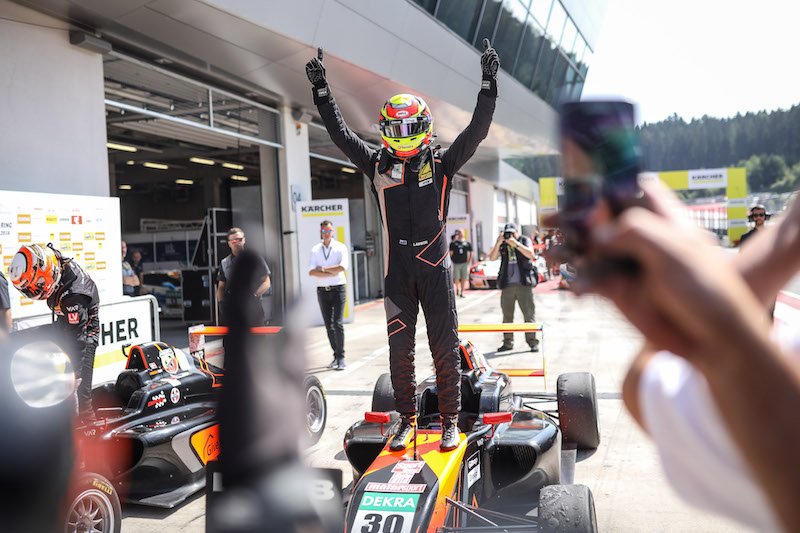 Liam Lawson claimed a Van Amersfoort Racing one-two at the Red Bull Ring with victory in the third and final ADAC Formula 4 race at the Austrian circuit.

Krutten had taken the lead at the start of the race when he passed reversed-grid pole-sitter Andreas Estner on the run into Turn 1.

He was able to pull a bit of a gap to both Lawson and Vesti as they looked to pass Estner, with Lawson making his move on Estner on the outside of the fast left-hander of Turn 5.

Vesti followed a lap later with a move on Estner to put the Van Amersfoort drivers second and third, behind Kuttner.

Lawson attempted to make a move on the outside of the slow right turn at Turn 2 but found himself being run out of road. Krutten was investigated and received a black and white flag for forcing Lawson off the track.

Krutten?s strong defence did not deter Lawson as he swept around the outside of the downhill, right-handed Turn 3 to take the lead of the race.

Vesti soon closed the gap to Krutten and made his move around the outside of Turn 2 which allowed Prema Theodore Racing?s Olli Caldwell to close up.

Caldwell was unable to pass Krutten with the top four finishing in that order, ahead of Lirim Zendeli in fifth.

It was a US Racing five-six-seven with Zendeli’s team-mates Mick Wishofer and David Schumacher finishing sixth and seventh, the latter having started 18th?on the grid.

Charles Weerts finished in eighth place, ahead of Estner and Joey Alders.