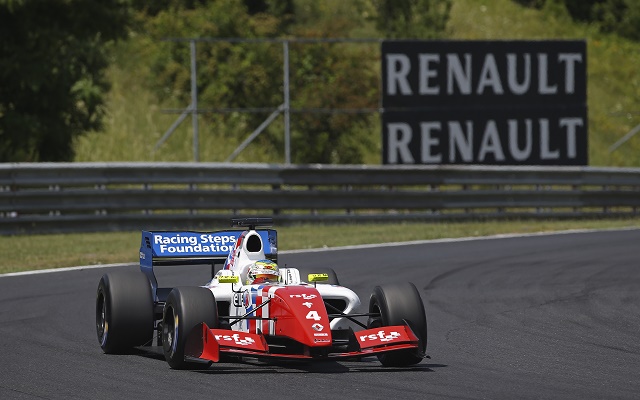 Fortec driver Oliver Rowland provisionally took his third victory of the Formula Renault 3.5 season in the Sunday race at the Hungaroring.

Rowland had recorded his worst qualifying result of 2015 with fifth earlier today, but was into the lead by turn one.

He managed to fend off Lotus WSR driver Matthieu Vaxiviere to keep the lead until the checkered flag, albeit is under investigation post-race.

Vaxiviere started the race from pole for the third time this season, having lost the lead on the opening lap on the two previous occasions.

And this time was no different – Rowland got an amazing start from P5, briefly looked on the outside into T1 before darting between Vaxiviere and Egor Orudzhev to take the lead.

Yesterday’s leader Orudzhev locked up and ran wide, falling out of the top ten, with other rookie Gustav Malja moving up to P3.

Despite his great start, Rowland did not get to pull away from the field – in fact, just a lap later, he’d have to work hard to keep Vaxiviere at bay.

The Frenchman stayed in touch with the Brit during the first stint as both opted to take their mandatory stops late, Vaxiviere going for it one lap earlier.

The stop by the Lotus crew looked solid enough, but Fortec managed to gain at least a second, Rowland rejoining in the lead despite a very quick outlap from Vaxiviere.

The Frenchman was all over the race leader in to time, though, looking on the outside of T1 and T2.

But Rowland kept his line and would do so for the remainder of the race. He finally put some distance between himself and Vaxiviere, who kept gaining in S1 but losing time over the rest of the lap.

Within a second until two laps to go, Vaxiviere ended up finishing a second and a half adrift.

Further down the field, Rowland’s teammate Jazeman Jaafar gained several places with an early-stop strategy and even managed to catch Malja in third. The Swede, however, held on with little trouble, taking a maiden podium in his rookie season in FR3.5.

Pietro Fantin finished fifth on the road, but received a ten-second penalty for crossing the white line on pit exit. As such, he was classified eighth, letting Tom Dillmann, Tio Ellinas and Roberto Merhi move up a spot each.

Dutchman Nyck de Vries kept compatriot Meindert van Buuren and a number of other cars at bay to take ninth.

With a lap to go, it was announced Rowland was under investigation, the reason for it unspecified. The Briton previously appeared to improve in S2 while double-waved yellows were out for Sean Gelael‘s trip into the tyre barrier, but Renault have confirmed that was unrelated to the investigation.

UPDATE: No action has been taken on Rowland and the Briton will get to keep his win.