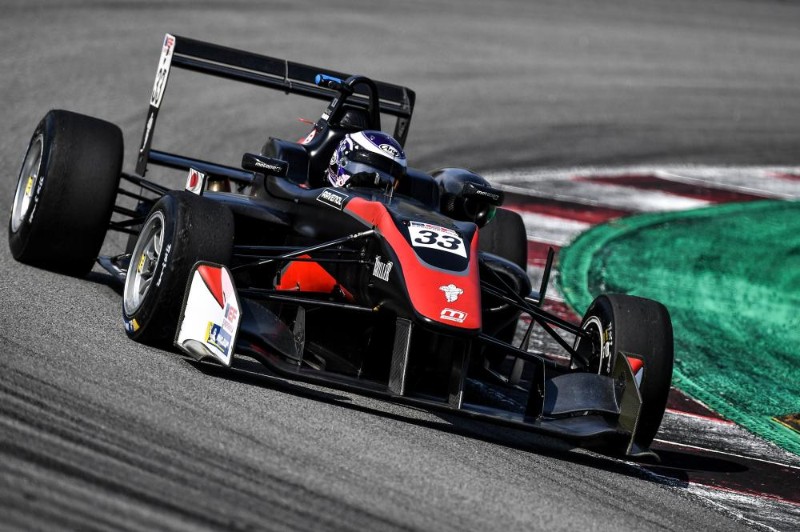 The cancellation of qualifying meant free practice times set the grid, and it was Carlin duo Billy Monger and Nicolai Kjaergaard who filled the front row.

That order started to be threatened by Lawson, who had passed three cars from eighth on the grid during the opening lap. He passed Carlin’s Christian Hahn on lap two, then cleared Monger for third three laps later.

While it didn’t take long for him to catch up to Lundqvist, who could not match the pace of leader Kjaergaard, there was stalemate for position between the pair in the tricky greasy conditions.

Lawson’s favoured position to get close was the high-speed Turn 9 righthander, but this often left him getting sideways and he eventually made his way past with a simple move around the outside of Turn 1.

Kjaergaard’s 3.6s lead quickly evaporated after this point, and he was just half a second ahead going into the final lap. Lawson was alongside halfway down the pit straight though, and repeated his Turn 1 move to take the lead and victory.

Kjaergaard and Lundqvist completed the overall and rookie podium behind him, while a late-race charge by Hahn earned him fourth ahead of Monger.

The title fight was focused on Lukas Dunner, who started fourth but was seventh by the end of the first lap. Needing to win and take fastest lap to remain in title contention, Dunner failed to make an impact and ended up sixth after Motopark’s Yuki Tsunoda was penalised in front of him for starting out of place on the grid.

Four places behind Dunner was Sato, who drove a trouble-free but anonymous race to secure the title with three races to spare.

Ido Cohen finished a comfortable seventh on his Formula 3 debut with Carlin, with Cameron Das coming from last on the grid to finish eighth for Motopark. Carlin’s Teppei Natori, who fell down to last after an early error, ended up ninth and was followed in his charge back up the order by Sato.

Occupying eighth for much of the race was Jack Doohan, before the Double R driver went off road when fighting with Natori and Sato.