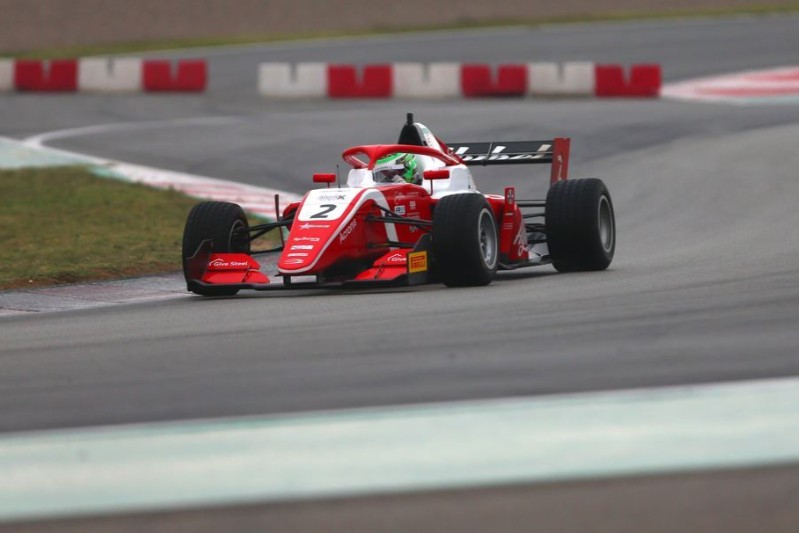 Formula Regional European Championship leader Frederik Vesti took another controlling win in the first race of the weekend at Barcelona, despite not leading nearly half of the race.

Poleman Enzo Fittipaldi led the first two laps before making a mistake and dropping to third, possibly due to a few rogue spots of rain, promoting US Racing’s David Schumacher and Prema team-mate Vesti into the top two positions.

Schumacher kept Vesti at a safe distance in his mirrors for a few laps, until a committed entry by Vesti into Turn 5 brought him alongside the leader. He had the overtake completed a lap later, and unleashed his true pace by immediately building up a three second gap.

That had extended to nearly six seconds when the race was interrupted by Sophia Floersch hit Konsta Lappalainen at the Turn 11 kink in their battle for fourth place. The resultant mess, and safety car, changed the order behind the podium battle.

Olli Caldwell was now in fourth, and on the safety car restart he tried passing team-mate Fittipaldi. They ended up running each off the road through Turn 2, allowing Van Amersfoort Racing’s racing returnee Dan Ticktum to slip by into second.

Vesti hadn’t quite escaped the clutches of Schumacher, but Ticktum quickly made advances on the German and executed a brilliant move around the outside of the Turn 10 hairpin for second.

This gave Vesti the breathing room he needed, and he crossed the finish line a lap later with a 1.816 second advantage.

After the safety car restart there was a second incident, as Guzman’s team-mate Igor Fraga clattered over the Turn 2 kerbs and punted off VAR duo Floersch and Alexandre Bardinon. Floersch managed to finish the race a distant ninth, behind ScoRace Team’s Sharon Scolari, while Bardinon was out on the spot and Fraga only got halfway around the final lap.