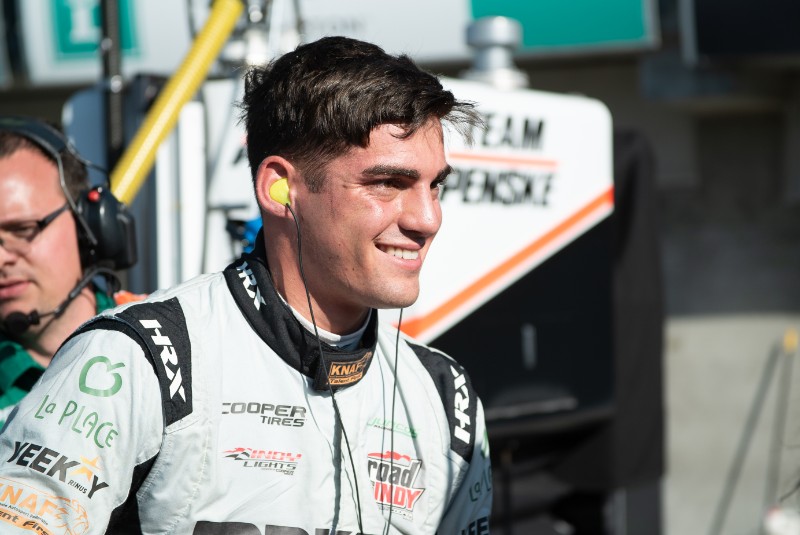 Juncos Racing’s Rinus VeeKay charged to pole for the final Indy Lights race of the season at Laguna Seca.

Championship leader Oliver Askew set the pace initially for Andretti Autosport, before being bettered by the joint HMD Motorsports/Team Pelfrey entry of Toby Sowery amid constant improvements in the field.

VeeKay was last on track during the first qualifying runs, but the extra clean air meant he moved to the top with his fifth effort.

He ended the first runs with an even faster lap, and one that remained as the top time until Sowery surpassed him with four minutes of the half-hour session left to run.

Askew moved into first place two minutes later, as VeeKay had an off at Turn 11 on his flying lap, and it looked like Askew would take pole until VeeKay posted the fastest lap of the weekend with 15 seconds to go.

“It was quite hard. I lost it on entry in Turn 11, and to not spin and be backwards I just went through the grass and went for another lap,” VeeKay said.

“It was tough with almost a red, and a yellow, and everything. I knew the car was going to be great, and I just took a deep breath and did what I had to do.

“The team made good adjustments to the car for the temperature, but you could really feel more grip in the high-speed corners just because of the cooler air [of the morning].”

To meet the timing beam before the chequered flag, Askew sped up on his cool down lap but was denied a final pole effort when his team-mate Robert Megennis span at The Corkscrew chicane.

Sowery and Megennis ended up third and fourth fastest, with Ryan Norman the last to post a lap to claim fifth. He was briefly stopped at Turn 6, nearly causing a red flag, but got his car going again safely.