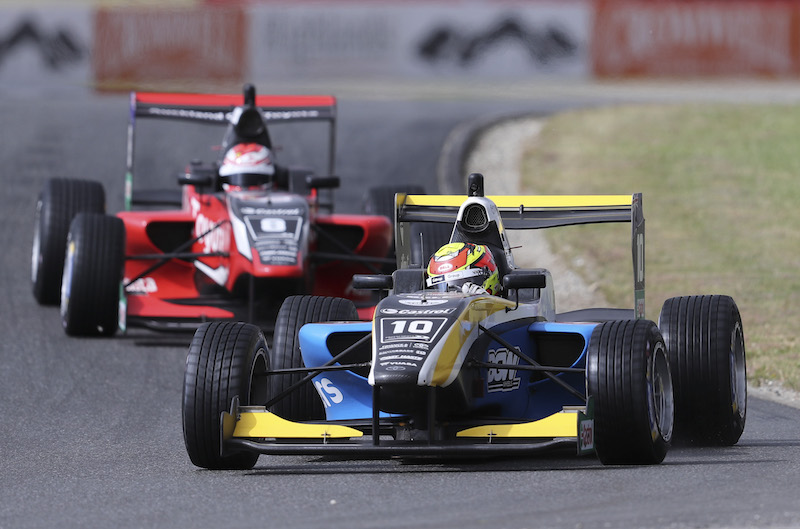 Liam Lawson rounded out an outstanding debut weekend in the Toyota Racing Series by taking a dominant second win in the feature race at Highlands, passing team-mates Marcus Armstrong and Lucas Auer along the way.

The returning Auer had edged Armstrong for pole position in second qualifying – moved to Sunday mornings for this season – but his car had to be hastily rebuilt by the M2 Competition crew in time for race three after he had crashed heavily to bring an early end to race two.

Rain prior to the finale meant it started with two laps behind the safety car, and Auer immediately came under heavy pressure from Armstrong and Lawson once the field was released.

An intense battle between the two Kiwi prodigies ensued on a drying track, with Lawson eventually finding a way past Armstrong by going around the outside of the final bend and into the first chicane on lap eight of 20.

He immediately reduced Auer’s advantage from 1.5 seconds to 1s within a lap, and within two he was right with the former DTM racer.

Coming off the crossover bridge, Lawson dived down the inside of the Turn 17 left-hander to grab the lead, and immediately set about extending his lead.

Armstrong tried to replicate Lawson’s move on Auer just a lap later, and eventually got past for second place into Turn 19 one lap later.

Lawson was already four second up the road by this stage, and the 16-year-old ultimately finished up 9.921s clear of Armstrong to win the Dorothy Smith Memorial Trophy – named for the mother of his mentor Ken Smith.

Petr Ptacek finished close behind Auer in fifth after qualifying a fine fourth, while Artem Petrov put a tough start behind him with sixth.

The championship’s third New Zealander Brendon Leitch was ninth, after he earlier took victory in the reversed-grid second race of the weekend when Esteban Muth was penalised for a jump start.

Leitch had in fact got ahead of pole-sitter Muth to lead away from the initial getaway, with Auer following him past into second from fourth on the grid.

When Petrov stopped with a damaged car, a red flag led to the field being reset to the grid order ready for a safety car restart.

Muth led Leitch by a narrow margin throughout the rest of the race, which was ended by another red flag with two laps remaining when Auer crashed into the pitwall while hounding Hyman for third.

After a lengthy investigation into the original start, Muth’s five-second penalty relegated him to fourth, behind Armstrong and ahead of Lawson.

Lawson leads the championship after the opening round, four points ahead of Armstrong.