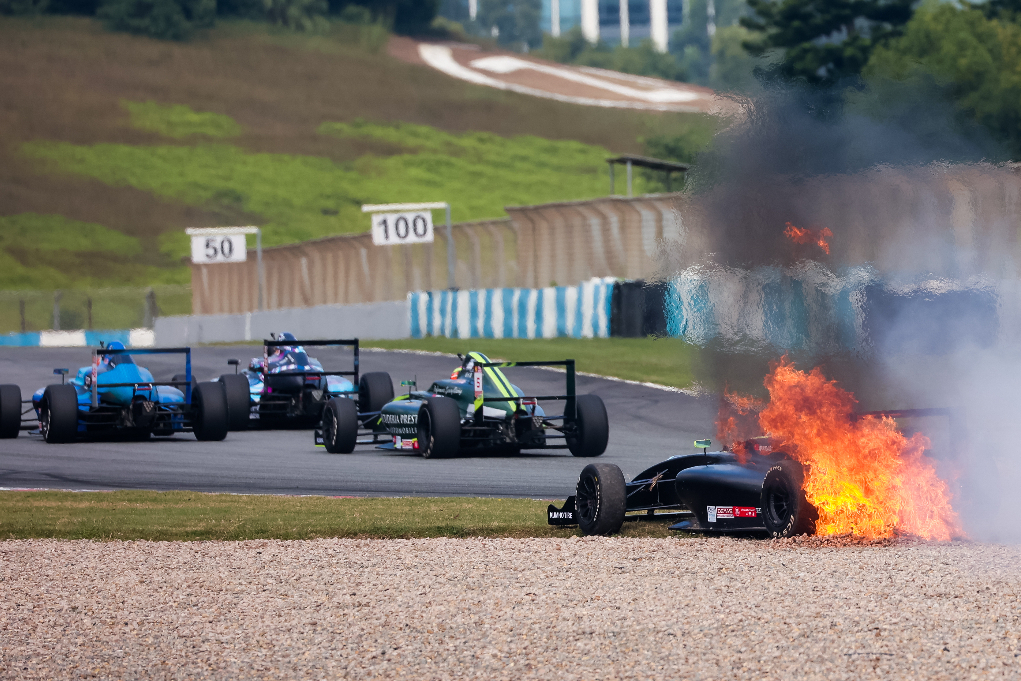 Charles Leong made it a clean sweep of wins from the first Chinese Formula 4 round at Zhuhai, but Sunday’s action was overshadowed by two fires.

Andy Chang started second but was jumped by Ryan Liu and didn’t have the pace to match the Smart Life Racing drivers up front, with Liu finishing ahead and taking the points for victory – due to Leong’s guest driver status – by 7.766s.

The third Smart Life car of Jingxi Lu had a close battle with Blackjack Racing’s Liu Tiezheng for fourth, eventually settled in Lu’s favour in a drag race to the line by 0.087s. However Tiezheng had a five-second penalty, which dropped him to sixth behind the guesting Neric Wei who had also been involved in the fight at times.

Chengru Hu from the back of the grid finished seventh for Champ Motorsport, involving himself in the chase for fourth until Tiezheng got by with a few laps to go, and met the chequered flag ahead of Zhongwei Wang whose iDEAK Racing-branded car was run by Kang’s Racing Company.

Both clocked five-second penalties, meaning Wang was classified ninth behind team-mate Brian Lee. Three other drivers were penalised, while LEO Geeke’s Sicheng Li was the only retiree after going into the gravel and his car setting on fire.

Li escaped from the flaming chassis and was unharmed by the incident.

Weiyuan Fang did make it to the finish, but spun and beached himself in the gravel late on. He was able to get back on track, albeit a lap down.

Race four was a reversed grid enounter, meaning Leong started 10th. By lap two he was already in second behind Chang.

Leong hounded him throughout, with Liu a few seconds further back, but their fight was interrupted by the safety car.

There had been a five-car battle for fourth raging, with Wang initially holding the position ahead of Hu, Tiezheng and Wei.

Hu was passed by the two behind on lap five, then the next lap Tiezheng got Wang for fourth at turn one. Wang reclaimed the place, but Tiezheng did the same next time by as Li got too close behind and went off at turn 4/5.

Li had a similar issue a lap later, this time mounting the rear of Hu. He stopped, while the ruptured fuel tank of Hu’s car set on fire, requiring the safety car. Dust was laid down where fuel had spilled, while the safety car picked up fourth rather than Chang.

The delay left a one-lap shootout at the end, with Tiezheng spinning away fourth while Leong dived down the inside of Chang at turn seven to claim the lead. The pair then fought all the way to the line for the win, with Leong triumphing by 0.143s.