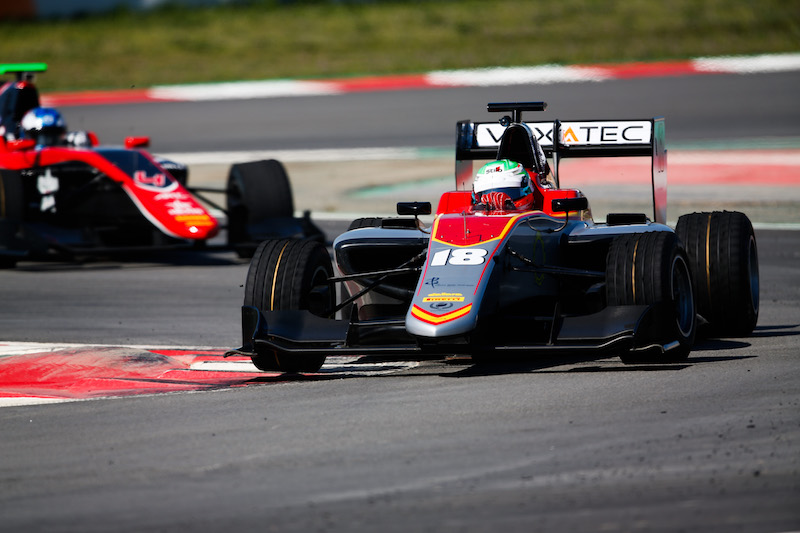 Campos Racing’s Leonardo Pulcini remained on top ahead of the ART Grand Prix drivers as GP3 pre-season testing resumed with a disrupted first day of running at Barcelona.

The afternoon session was extended by an hour after a lack of running in the morning, caused by large amounts of dirt left on the track in sector three, which was used for the opening round of the World Rallycross season last weekend.

The teams eventually used transport tyres – treaded tyres usually used for nothing more than installation laps – to lap the circuit and help clean the track before some teams used slicks in the closing stages of the morning session to set competitive times.

Dorian Boccolacci topped that late-morning running with a 1m34.964s, but that would be eclipsed in the afternoon by the 1m32.785s, who kept up his table-topping pace from last month’s Jerez test.

The Italian hit the top in the final five minutes, beating Callum Ilott by 0.012 seconds after the Ferrari junior had been leading an ART 1-2-3 with team-mates Nikita Mazepin and Jake Hughes.

Behind them, second-generation Trident drivers Giuliano Alesi and Pedro Piquet rounded out the top six in front of the remaining ART driver Antoine Hubert, who caused a red flag when he crashed at Turn 3.

David Beckmann was eighth for Jenzer Motorsport, in front of MP duo Boccolacci and Niko Kari.

Will Palmer, in action for the first time since December’s Abu Dhabi test, was 13th in MP’s third car.