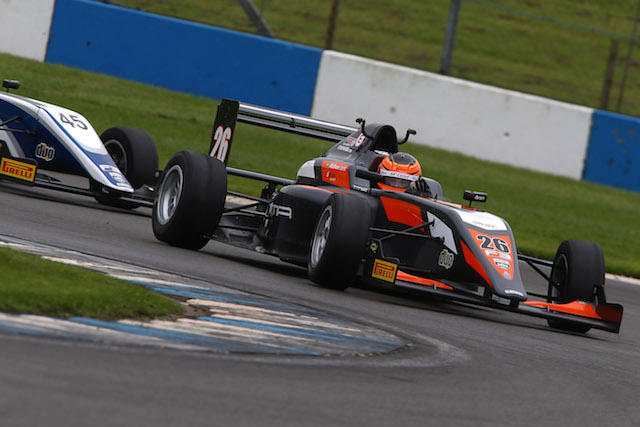 Matheus Leist has secured the BRDC British Formula 3 crown in the final race of the season at Donington Park, where?Toby Sowery?clinched his second clear win of the day.

Having been squeezed onto the grass looking for a way past Harrison Scott?off the start, Leist spent the entire race in fifth place with his rival?Ricky Collard?up behind him, having led by 25 points coming into the finale.

Collard needed a top-two?finish with Leist not finishing in the?top 16, but didn’t try a risky move and finished one place behind his rival.

Having claimed pole position with the fastest lap in his commanding race-two drive, Sowery was dominant again in the finale, finishing up 4.4 seconds clear of Douglas Motorsport drivers?Enaam Ahmed and?Thomas Randle, who spent several laps nose-to-tail after Randle forced his way past Scott.