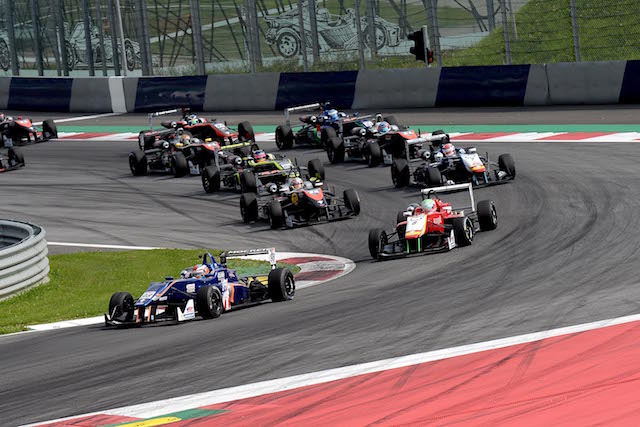 Colton Herta has taken a lights-to-flag win in the second Euroformula Open race at the Red Bull Ring.

The American driver led from pole position and blitzed the rest of the field on his way to a clean sweep of the weekend.

When the lights went out, Ferdinand Habsburg got the initial jump on?Herta from second on the grid, but just before he reached the first corner, Habsburg’s car slowed considerably allowing the likes of Leonardi Pulcni and Antoni Ptak?ahead of him.

With Habsburg slowing his rivals up, Herta used this as a chance to make a gap on Pulcini in second.?Habsburg would retire a few laps later with apparent?gearbox issues.

After the major incident in race one, race two started rather quietly, with drivers running line astern with little overtaking in the beginning stages of the race.

After nearly ten?laps of little to no action in the top ten, Diego Menchaca was finally getting close enough to Ptak ahead to make a move on the Polish driver. Menchaca tried once at turn three, then again at turn four, but Ptak was able to position his car in the right places to keep the Mexican behind.

Now Ptak was starting to form a train as Nikita Troitskiy and?Tatiana Calderon joined onto the back of Menchaca to make it a four way fight for third position. Calderon began making a move on Troitskiy for fifth position into turn two, with the two nearly colliding on the exit of the turn, and then again into turn three, but Troitskiy was ultimately able to hold off the charge from Calderon for another lap.

But disaster struck Ptak as he tried to pull out a gap on Menchaca, but found himself spinning violently off the track on the exit of the final corner. He rejoined the track but was now way out of the points.

With no one able to come close to him, Herta took the chequered flag by nearly 12 seconds from championship leader Pulcini. With Ptak out of the running, Menchaca inherited the final podium position in third. Fourth place went the way of Troitskiy, with Calderon breathing down his neck across the line in fifth position.