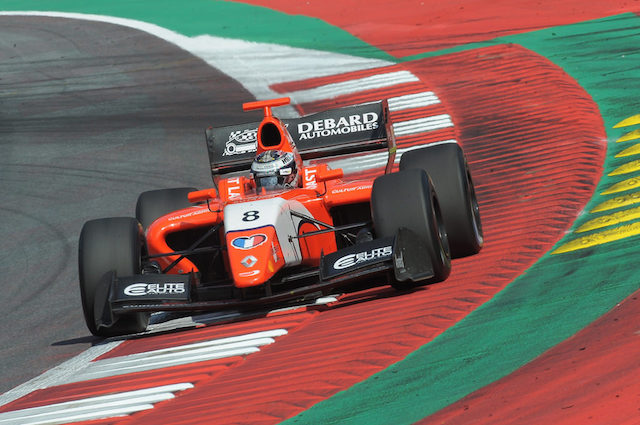 Aurelien Panis has won for the second time this season by winning race two of the Formula V8 3.5 round at the Red Bull Ring.

Though the Frenchman wasn’t on for the win at the start of the race, an early safety car and sublime pit-stop strategy catapulted him into first position, where he would stay until the chequered flag.

After taking a surprise first pole,?Matevos Isaakyan made the best start he could have hoped for as he?kept?ahold of first position into the first corner.

Louis Deletraz on the other hand had a much slower start, allowing race one winner?Matthieu Vaxiviere a run?on the Swiss driver coming into to turn two, but Deletraz was just able to hold him off.

The next best starter was?Panis, who managed to make his way past?both Roy Nissany and championship leader Tom Dillmann to put?himself into fourth position on the track.

The race was brought to an early standstill as gentleman driver?Giuseppe Cipriani made a mistake coming out of turn five and beached himself in the gravel trap. With the Italian driver’s car in a dangerous position, the safety car was called out, ruining Isaakyan’s several-second lead.

When the safety car departed, Deletraz was able to keep up with Isaakyan, but had to turn his attention back to?Vaxiviere behind who was attempting to pass him at almost every corner.

With five laps completed, the pit window was open and several drivers including Panis all made their pit-stops early. Deletraz came in a couple laps later but was jumped by Panis as he exited the pit-lane. Vaxiviere would also?pit from second place on the track, but he would then fall behind both Panis and Deletraz.

Isaakyan finally pitted from the lead, but a slower stop dropped the Russian driver behind Panis but still ahead of Deletraz. Dillmann was the last to make a pit-stop, with the French driver able to get out ahead of Isaakyan, but Panis still came out on top.

Back in the pack, Nissany tried to make a passing move around the outside of Yu Kanamaru into turn four. Unfortunately for both, Nissany’s front wing made contact with Kanamaru’s rear tyre, slicing it instantly?and sending the Japanese driver?into the gravel trap. The damage to Nissany’s car forced the Lotus driver to pit for a new wing.

But with superior strategy in hand, Panis was able to clinch his second win of the season with ease ahead of Dillmann in second, and Isaakyan holding out onto third and taking his best finish of the season. Deletraz faded towards the end to finish just ahead of Orudzhev in fourth and fifth respectively.

Despite his strong start, Vaxiviere finished way down in sixth position. Alfonso Celis was the next to cross the line in seventh position, ahead of Vitor Baptista in eighth, and Beitske Visser in ninth. Marco Bonanomi rounded out the points paying positions in tenth on his comeback weekend.