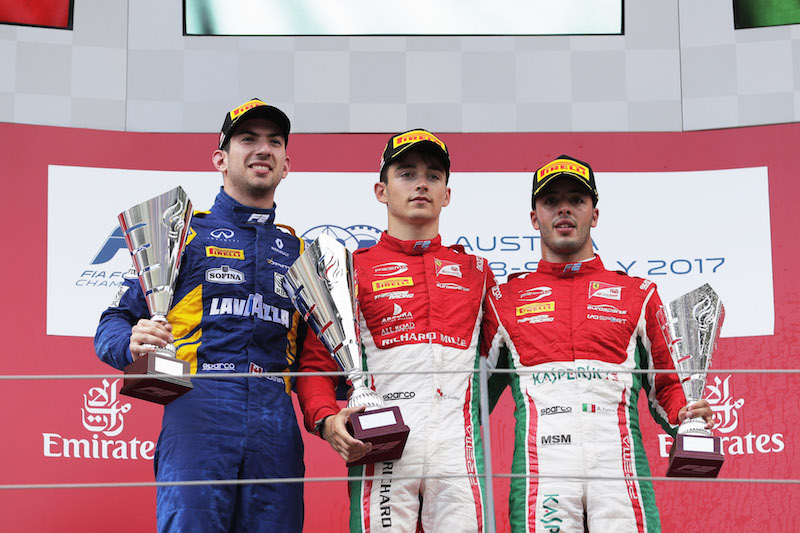 Charles Leclerc increased his Formula 2 championship lead with a straightforward feature race win at the Red Bull Ring, as Nicholas Latifi impressed from eighth to deny Prema a one-two finish.

From his fifth pole position in as many attempts, Leclerc kept the lead at the start ahead of team-mate Antonio Fuoco and the ART duo of Alex Albon and Nobuharu Matsushita, as a slow-starting Oliver Rowland fell to sixth behind his DAMS team-mate Latifi.

As the first stint wore on on the soft tyres, Leclerc increased his advantage over fellow Ferrari junior Fuoco to seven seconds, before pitting a lap after the Italian with nine of the 40 laps remaining.

He regained the lead one lap later when Matsushita came into the pits, and enjoyed an advantage of six seconds over an intense fight for second.

His margin at the finish however was only 1.3s over a charging Latifi.

In contrast to Prema and ART, DAMS had started its drivers on the supersoft tyre, with Latifi and Rowland pitting six and seven laps in respectively.

Rowland re-passed his team-mate in the middle of the race, in addition to a number of the slower soft-tyre starters, before jumping ahead of Fuoco when the Prema man made his pit-stop.

On fresher, faster rubber, Fuoco managed to pass Rowland into Turn 3 a couple of laps later, but with the need to preserve the supersoft until the end, he was unable to pull away.

However, just as it seemed when Rowland may attempt to get the position back, he had to deal with interest from Latifi behind.

The Canadian attacked on the run to Turn 4 and completed the move around the outside of Turn 6 – just as he had done in a similar battle with Rowland on lap two of the race.

Latifi then quickly caught Fuoco, passing him into Turn 1 with three laps to go as he clinched his third podium in a row.

Rowland was not able to follow, having to settle for fourth as Fuoco improved considerably on his previous best F2 result of ninth.

Albon – racing with the broken collarbone that forced him to miss Baku – led home Matsushita in fifth and sixth, while Ralph Boschung bettered his pair of eighth-places in Azerbaijan with seventh after keeping Artem Markelov at bay at the end.

Nyck de Vries finished 13th after stalling from seventh on the grid on the formation lap, with Luca Ghiotto one place further behind after he stalled exiting his pit box.

Norman Nato was racing Ghiotto and the DAMS drivers in the early stages when his car coasted to a halt on the pit straight.