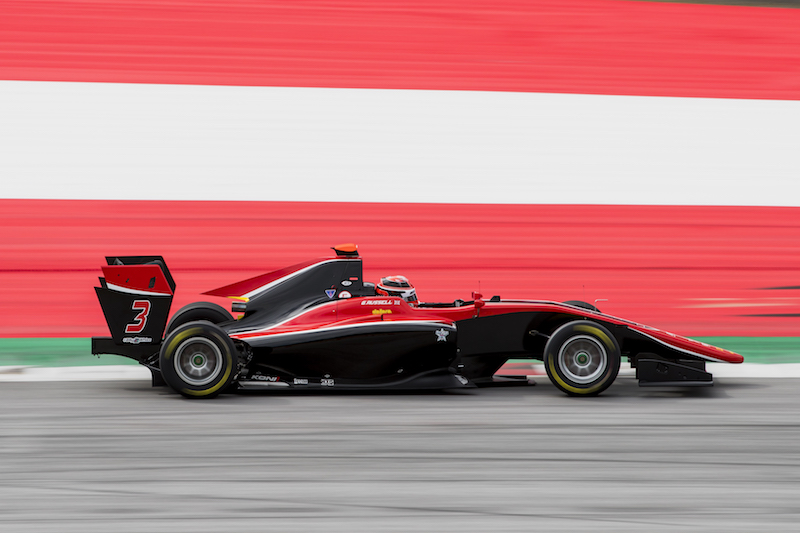 George Russell took his first GP3 win at the head of an ART Grand Prix clean sweep in race one at the Red Bull Ring.

From second on the grid, Jack Aitken got a slightly better launch than Russell, but Russell moved over towards the pit wall to cover off his team-mate.

Behind the top two, there was carnage at Turn 3 when Anthoine Hubert braked late up the inside of Arden drivers Leonardo Pulcini and Steijn Schothorst, causing contact between them and triggering a virtual safety car.

While the Arden duo would both retire – as would their team-mate Niko Kari who was spun around by Julien Falchero at the first corner – Hubert managed to continue in third.

He was later handed a 10-second penalty for causing the incident, but such was the advantage for ART over the opposition that the only position this cost him was to Nirei Fukuzumi, who steered his way through from 10th on the grid.

The lap times Russell and Aitken were remarkably closely-matched for most of the race, with no more than one second between the pair on track.

Russell did manage to pull away near the end, finishing 2.3s clear as ART celebrated the first ever top-four lockout in GP3.

Some 17 seconds behind the French squad’s quartet at the line, there was practically a second race for fifth place.

Giuliano Alesi avoided the first-lap drama to climb to fourth, although on lap three he was passed by both Fukuzumi and his Trident team-mate Ryan Tveter.

Alesi spent the middle of the race trying to get back past Tveter, but late on both were caught by another Trident driver Dorian Boccolacci.

The Frenchman had started third but was forced to avoid the Turn 4 incident and was then very slow at the restart after the virtual safety car, causing him to fall to 10th.

After sitting patiently behind Tveter and Alesi, Boccolacci passed the latter at Turn 4 on lap 22 of 24, and got ahead of Tveter at the same point on the penultimate tour.

Tveter came back into Turn 6 though, and when Boccolacci then tried to go around the outside of the American at the end of the lap, he ran wide and slipped back to 10th.

Tveter and Alesi therefore completed the top six in front of Alessio Lorandi and Raoul Hyman, who will get the chance to resume their intense battle from the front of the race two grid.

Tatiana Calderon made up 10 places from the back of the grid to cross the line ninth, but both she and DAMS team-mate Bruno Baptista were penalised for overtaking under yellow flags, enabling Arjun Maini to get the final point behind Boccolacci.