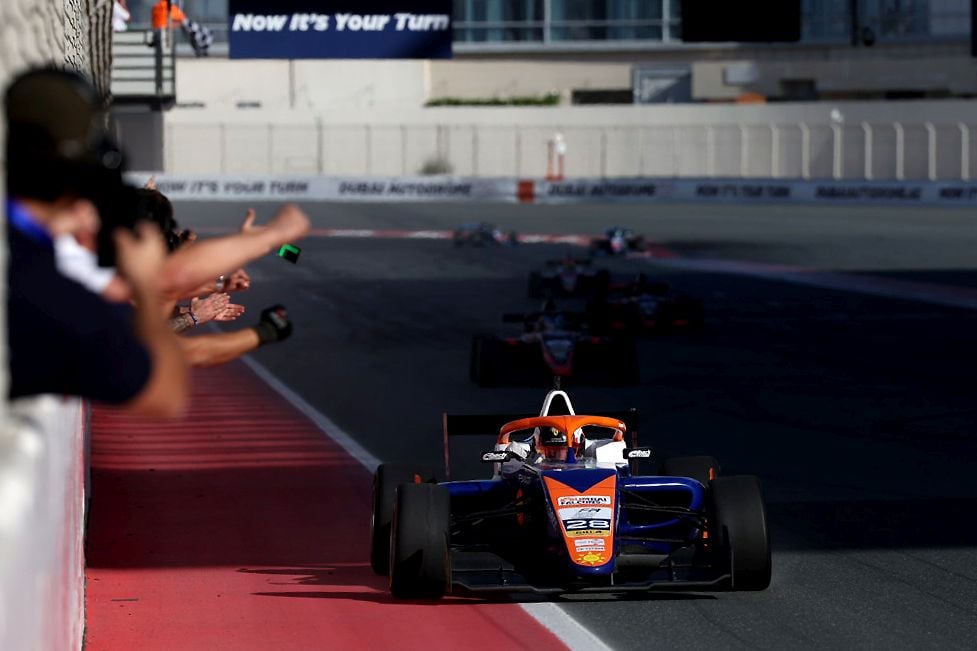 Mercedes-AMG junior Aron qualified on pole and was immediately under pressure at the start but able to hold onto the lead initially from Mumbai Falcons’ Leclerc and Dino Beganovic, who were also trying to fend off their title rival Isack Hadjar.

Within a lap, Aron had stretched out a gap of over seven tenths of a second to Leclerc. However, the gap closed over the next few laps.

Leclerc attempted to overtake on the inside of turn one once he was close enough to attack, but Aron held onto the lead despite going off the track. Ferrari junior Leclerc then passed in the following corners to take over up front.

Meanwhile Hadjar had come under increasing pressure and was then passed for fourth by his Hitech GP team-mate Gabriele Mini. There was a battle behind them too, with Ollie Bearman and Pepe Marti squabbling and being chased by Patrik Pasma.

A place was gained by Pasma, while Bearman made a trip to the pits on lap seven of 15 and rejoined outside of the points. That freed Marti to hunt down Hadjar, with Michael Belov and later Jak Crawford and Pasma doing the same and as Hadjar dropped down the order he fell out of title contention.

As Hadjar’s title hopes expired, Beganovic’s race did the same as he slowed from third place and later retired. That promoted Mini to the podium, but a post-race penalty then knocked him back down the order and put Marti in third.

With Leclerc taking a comfortable win ahead of Aron, it means he now has a 40-point lead over Marti going into the final round. There is still a five-way fight for the title runner-up spot.