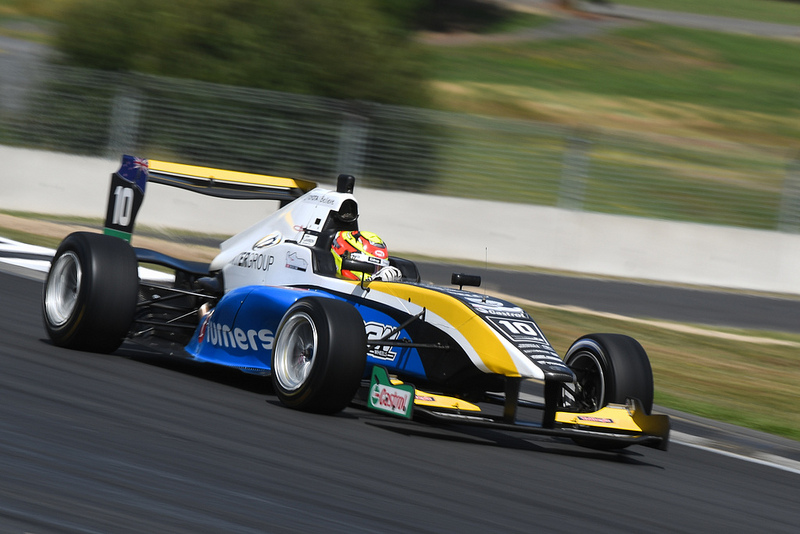 Lawson spent the first half of the race sitting in third behind M2 Competition team-mate Lucas Auer, a position he aquired after making contact with Jackson Walls and sending the MTEC Motorsport driver into a spin, a incident that is now being investigated.

Auer put up a strong defence, allowing poleman Muth to build a lead of more than two seconds, before a small lock-up gave Lawson the opportunity he needed. The 16-year-old dived up the inside to take second and set about closing the gap to Muth.

Muth’s two second gap was reduced to nothing in just a handful of laps and it wasn’t long before Lawson was eyeing up an overtake on the Belgian driver. Like Auer, Muth defended well, soaking up the pressure and allowing Auer and Marcus Armstrong to join them at the front of the field.

Just as Auer and Armstrong were getting close enough to make it a four way fight, Lawson dived up the inside of Muth at the start of the final lap. He snatched the position and, though Muth tried to fight back, held on to take his first win since the opening round of the championship.

Auer tried to follow Lawson past, pulling alongside Muth, but Muth held on to take second, his first podium of the season. Armstrong finished fourth, succumbing the championship lead to Lawson in the process, and completing a M2 lockout of the top five with team-mate Cameron Das behind him in fifth.

After a brief fight with Australian Formula 3 champion Calan Williams early in the race, Kazuto Kotaka took sixth, ahead of Artem Petrov and Williams.

Raoul Hyman, who had been running at the sharp end of the field before a trip through the gravel, took ninth, with Brendon Leitch beating Petr Ptacek to the final spot in the top 10.

Armstrong will start the final race of the weekend, the New Zealand Motor Cup, from pole, with team-mates Auer and Lawson just behind.