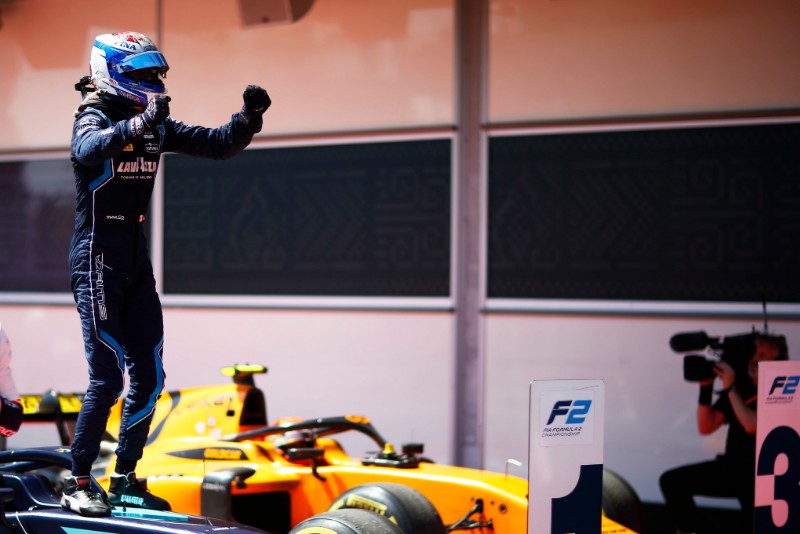 Latifi first took the lead from Sean Gelael, who emerged from Turn 1 of the opening lap in first place after passing poleman Nikita Mazepin, who later said there was something “wrong” with his throttle at the start.

Mazepin had inherited pole after Luca Ghiotto received a five-second penalty for contact with Sergio Sette Camara in the feature race, which left him ninth on the grid for race two.

Gelael spent five laps in the lead before Latifi passed down the inside of Turn 1, and established a lead of around three seconds before the first safety car appearance on lap nine of 19.

Giuliano Alesi?s had ended his race in the barriers at Turn 3 after passing Guan Yu Zhou with the use of DRS, but then locking up his left-front tyre.

Latifi maintained the lead when racing restarted four laps later, switching back from the outside of the corner to the natural inside on Sauber junior Juan Manuel Correa after he locked up his left-rear tyre at Turn 1.

The safety car would return just moments later as Campos Racing’s Jack Aitken put his car to the right of a vulnerable Correa out of Turn 2, being unable to pass around the outside, but received a tap from Ghiotto. The Virtuosi Racing driver?also crashed into the barriers at Turn 3, with Nikita Mazepin and Jordan King stopping at the same spot.

Nearly 10 minutes was spent removing the cars before a two-lap shootout for the win. Latifi wasn’t threatened though, and after picking up the points lead in the feature race he extended it to 19 points over Aitken, who finished third.

Gelael held off Callum Ilott for eighth in the last metres of the race, with the two crossing the line side-by-side.