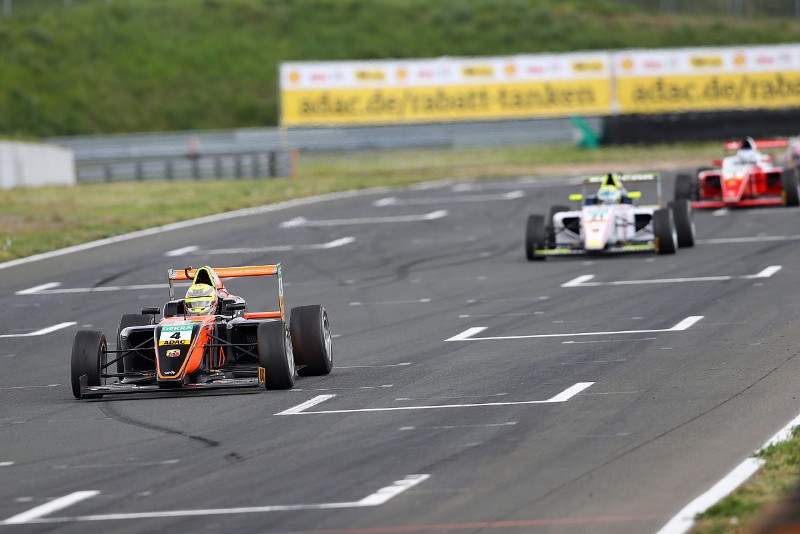 Niklas Krutten won a dramatic second race of the ADAC Formula 4 season at Oschersleben despite a final corner collision with Arthur Leclerc.

In a race held in drying conditions, Krutten held on to win on wet tyres. Leclerc climbed up from the back of the field on slicks, having pitted during a late safety car period, but a failed attempt at the lead resulted in third place, behind fellow Sauber junior Theo Pourchaire.

The race started in damp conditions behind the safety car, with all cars fitted with wet tyres. Poleman Dennis Hauger held on to the lead for one lap once racing got underway, but after running wide ended up spinning off track.

Race one winner Gianluca Petecof inherited the lead, and started to the pull away. But as the track started drying, the Ferrari junioe started to struggle for grip on his wet tyres, and a sideways moment saw him drop down to third.

Pourchaire briefly led, but was soon passed by Van Amersfoort Racing’s Krutten, before the safety car was brought out again following a collision between his team-mate Ido Cohen and Mucke Motorsport driver Nico Gohler.

Petecof, who had slipped down to fifth before the safety car period, took the opportunity to pit for slick tyres, and was followed in by Leclerc.

When racing resumed with a few minutes to go, Petecof and Leclerc soon started climbing through the field, enjoying far more grip than cars on wet tyres.

Petecof moved up to fourth, but his chances of a second win of the weekend came to an end as he collided with Prema team-mate Aron – the 16-year-old Brazilian involved in a furious exchange with his team after pulling into the pits to retire. Aron was able to continue and finish in fourth.

Leclerc found himself in second with a lap go but, despite being several seconds behind, was able to haul in leader Krutten on the last lap, making a challenge for the lead at the final corner. ?

The two cars touched, with Krutten holding on to take the victory, but a trip across the gravel saw Leclerc pipped to second place by Pourchaire.