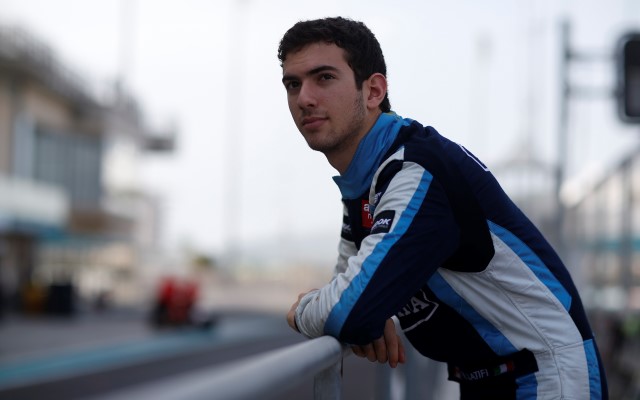 Canadian Latifi – who is poised to race for Prema in this year’s FIA F3 European Championship – pipped Ed Jones to top the morning session and then shaved four seconds off his time to beat Raffaele Marciello to top spot in the afternoon.

F3 Open champion Jones – who will drive for Latifi’s 2013 team Carlin in the FIA series this year – led much of the morning running but was edged out by just two hundredths of a second with exactly a minute left on the clock.

Third in the morning, Marciello was the fastest of the three Ferrari proteges who will take part in the new series for modified Formula Abarth cars. Fellow Academy ace Antonio Fuoco had to sit out a large part of the session after being crashed into in the pitlane by Max Verstappen, but managed to get back out in the final half hour and take fourth.

Dennis van de Laar – a future team-mate of Latifi and Fuoco at Prema in F3 – took fifth ahead of the final FDA member and karting graduate Lance Stroll. Verstappen took seventh after emerging for the final ten minutes, ahead of Tatiana Calderon, Alex Bosak and Vasily Romanov.

Latifi again left it late to hit the top in the afternoon, bettering Marciello by 0.071 seconds at the chequered flag.

Marciello himself had only moved into P1 with two minutes left, displacing Fuoco who had sat in first place since 30 minutes into the three-hour session.

Calderon was within two tenths of the pace in fourth ahead of van de Laar and Jones, who crashed out after just eight laps. Verstappen led the early running with a series of fast laps but slipped to seventh ahead of Stroll, Romanov and Bosak. Japan’s Takashi Kasai propped up the 11 runners in both sessions.

The Florida Winter Series takes place over four rounds over the next five weeks, with the first at Sebring from Saturday to Monday.