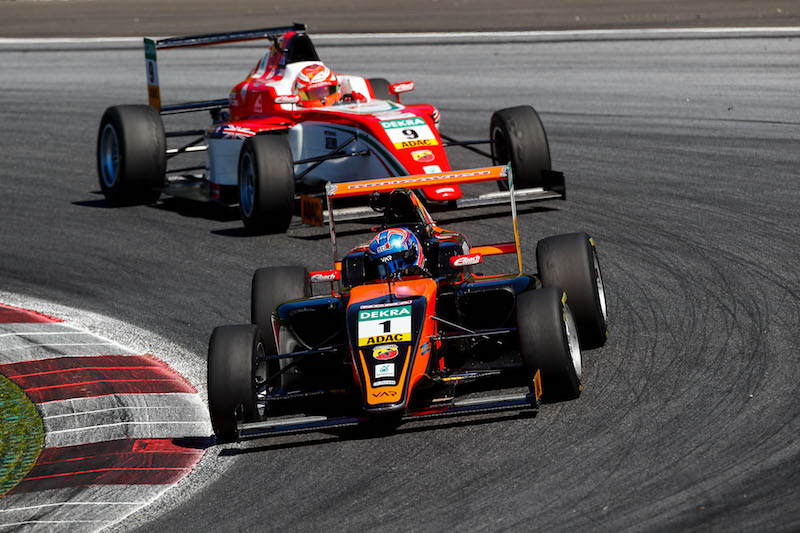 Felipe Drugovich has shot into prime position to snatch the ADAC Formula 4 title at Hockenheim this weekend in a dramatic late twist.

The Brazilian’s hopes were first boosted on Wednesday when he was gifted his sixth win of the season after the DMSB finally dismissed the appeal by US Racing against its exclusion from the qualifying session for round two at Lausitz in May.

Even more importantly, Drugovich was then second fastest in qualifying at Hockenheim, while the championship-leading Prema drivers Marcus Armstrong and Juri Vips struggled woefully, managing only 21st and 14th respectively.

At Lausitz, US Racing’s four drivers had locked out the top places in qualifying but were then excluded because their cars did not have camber shims fitted?to the front right wheel suspension.

After an appeal was lodged the drivers were allowed to race from the front of the grid, with Kim-Luis Schramm and Julian Hanses winning the two main races, but they and team-mates Fabio Scherer and Nicklas Nielsen have now been excluded from the whole event after the appeal was thrown out.

Drugovich inherited the win from the second race at Lausitz after originally finishing second to Hanses, with championship leaders Marcus Armstrong and Juri Vips moving up from third and fifth to second and third.

Schramm’s win went to Drugovich’s Van Amersfoort team-mate Kami Laliberte (who has been absent from the series since contracting a virus at the Nurburgring last month), with Drugovich himself taking fourth behind Vips and Armstrong.

Race three was unaffected in terms of the title fight, as Drugovich won on the road anyway while Armstrong and Vips failed to score after first-lap contact.

Arguably the larger twist came in the Hockenheim qualifying session, where Drugovich missed out on pole by only 0.057 seconds to Mucke driver Lirim Zendeli.

Vips and Armstrong’s lowly results came after they finished both free practice session outside of the top 10 while Drugovich was fastest overall. Armstrong suffered a further issue in qualifying that restricted him to one competitive lap time that was 1.8s off the pace.

If Drugovich maintains second place in the opening race and his rivals cannot get into the points, he would move to just half a point behind Armstrong.

He would then also start race two from second on the grid based on second-fastest qualifying times, with Zendeli on pole again, Vips 14th and Armstrong at the back of the grid.