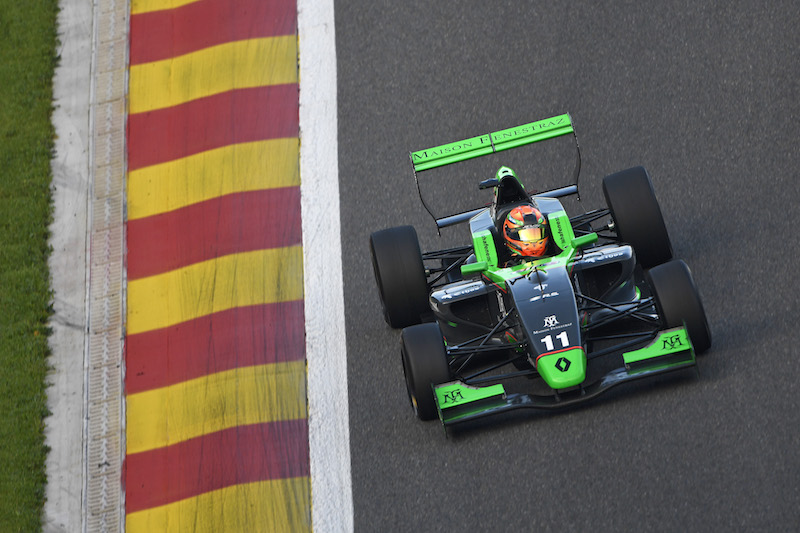 Sacha Fenestraz kept up his imperious Formula Renault form by claiming pole for all three races at the penultimate Eurocup round at Spa-Francorchamps.

The championship leader started off by topping the first group in the opening qualifying session with a 2m17.317s – three tenths ahead of Josef Kaufmann Racing team-mate Yifei Ye.

Title rival Robert Shwartzman topped the second group, but could only manage a 2m17.570s.

Second-fastest times from first qualifying determine the grid for the second race of the weekend, with Fenestraz to be joined on the front row of the grid by Gabriel Aubry.

In second qualifying, setting the grid for race three, the Shwartzman-Aubry group hit the track first with the Russian coming out on top over the Frenchman by 0.02 seconds.

Will Palmer – currently Fenestraz’s closest title rival with a 27-point deficit – was three tenths slower than the Franco-Argentine to secure third on the grid for race three.

He will only start ninth in the earlier two races, however, meaning he would end the weekend out of mathematical title contention if grid positions were to be maintained to the end of each race. No driver has converted pole to victory in a Eurocup race at Spa since Arthur Pic in 2010, however.

Shwartzman, starting second, fourth and second across the three races, begins with a 52-point deficit to Fenestraz after being stripped of both wins at Paul Ricard.

Local favourite Max Defourny starts fourth alongside Ye for race one, but slips back to sixth on the grid for races two and three next to Max Fewtrell, who has a hat-trick of fifth places.

Red Bull Juniors Richard Verschoor and Neil Verhagen almost exclusively occupy the fourth row through the weekend, although Thomas Randle steals seventh from Verschoor for race two, when the Dutchman slips to 13th.

The Spa races also count towards the NEC for the championship’s five full-time drivers, with title favourite Gilles Magnus claiming all three poles. He’s 14th on the grid for race one before moving up to 10th place to start alongside Palmer and Ye in the other two races.

None of the Belgian’s rivals are due to start any race from inside the top 20.

The third Red Bull Junior Dan Ticktum had a day to forget, ending up 18th, 18th and 14th on the grid for the three races.