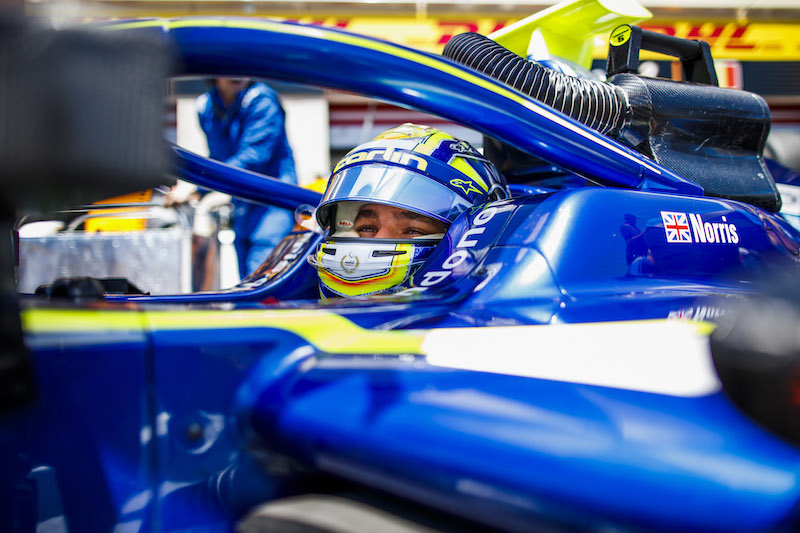 Lando Norris set the fastest time for Carlin during the Formula 2 free practice session at Paul Ricard, as seven different teams took a spot in the top seven.

Norris goes into the fifth round of the 2018?F2 season with a 17 point gap to Russian Time’s Artem Markelov and DAMS’ Alex Albon in the drivers’ championship, although has only won one race so far this season.

Antonio Fuoco and Louis Deletraz were the first drivers to set a fast lap at the beginning of practice, but it was Norris that led for the majority of the session.

The practice session went by without any major incidents, although Markelov did miss much of it after running into an issue with his car.

ART’s George Russell, who is currently fourth in the overall drivers’ championship, was less than a tenth of a second behind Norris’ fastest lap in second.

Maximilian Gunther was not too far behind Russell with his lap time, which was good enough to keep third place. Prema’s Nyck De Vries was the final driver to get within five-tenths of Norris in fourth position.

Albon, who also had an issue at the beginning of the session which led him to crawl back to the pits, was able to get out again, going sixth fastest?overall.

Luca Ghiotto was the seventh driver from a different team in the top seven times of the session for Campos Racing, with his lap time 0.225s adrift of Albon.

Russell’s ART team-mate Jack Aitken was able to go eighth with his lap, while Ghiotto’s?team-mate Roy Nissany was ninth.

Even after missing most of the session, Markelov rounded off the top 10 with a 1m46.483s lap time.

Sergio Sette Camara was 12th overall in his first session since suffering a hand injury during qualifying in Monaco, which led him to miss both races.