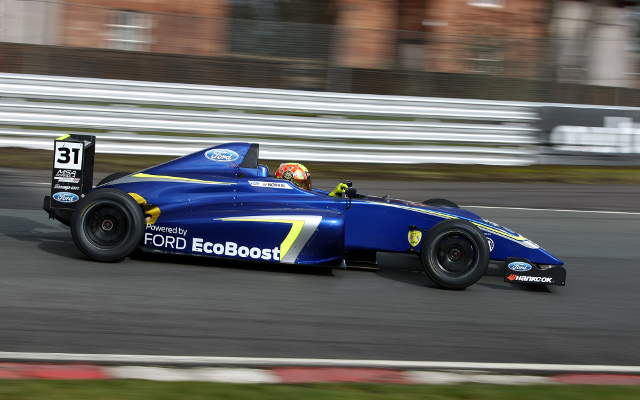 Lando Norris was dominant in MSA Formula qualifying at Oulton Park, claiming a double pole position and lapping six tenths faster than anyone else.

Fresh from an appearance in Italian F4 at Monza last weekend, the world karting champion had set the pace in both of Friday’s pre-event test sessions and carried his form into qualifying.

Norris set a commanding pace with his time of 1m22.143s, posted before a lengthy red flag period when Fortec debutant Toby Sowery needed to be recovered after a crash at Druids.

15-year-old Norris’s final flying lap was enough to make sure he topped the classification for second-fastest times, and secure a double pole.

Championship leader Ricky Collard will start second in races one and three, while Rafa Martins and Colton Herta will share row two on both occasions as the Brazilian narrowly pipped the American in both classifications.

Another Brazilian Matheus Leist moved into fifth place with his final lap at the expense of Jack Barlow, but the pair will be switched around for race three.

Double Donington winner Dan Ticktum had to settle for seventh ahead of Sennan Fielding, Petru Florescu and James Pull. Florescu headed this quartet on second-fastest times and will start race three in seventh, in front of Ticktum, Pull and Fielding.