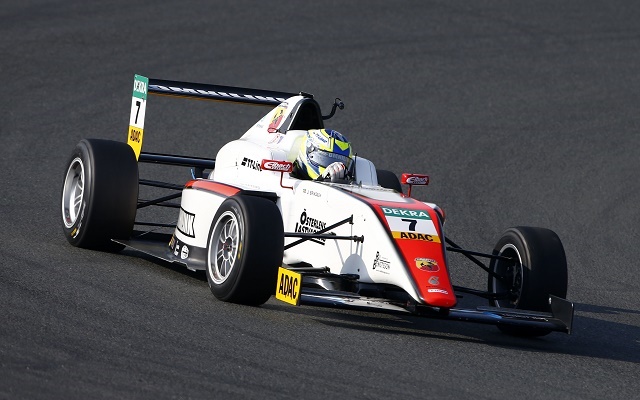 The Swede started from pole and spent most of the race in defensive mode, holding off Prema drivers Ralf Aron and Guan Yu Zhou.

Indeed, Ferrari protege Zhou, lining up alongside Eriksson, could very well have taken the lead into turn one. The Chinese driver took the inside line, but Eriksson stuck to the outside and got a better exit. Aron also took advantage, passing his Prema teammate for second.

Further back, Van Amersfoort Racing’s Mick Schumacher clattered into the back of a Mucke car before ricocheting into a Race Performance machine and damaging his suspension. The German ended up in the turn two barriers, bringing out the safety car.

He was not the only casualty of the first lap – Marvin Dienst, who had led the points after Oschersleben, had to call it a day in the pits.

Eriksson enjoyed a solid enough restart, but soon had both Aron and Zhou on his rear wing, only to be given a breather by another safety car – Nikolaj Rogivue and Jan Jonck had collided, the latter ending up parked in the barriers.

And that was enough for Eriksson to defend the win, his next restart going swimmingly and allowing him to stretch his legs over the final few laps.

As Aron took second, Zhou had to fend off third from Michael Waldherr, but persevered, picking up his first podium in the German series a week after the Italian F4 hat-trick at Monza.

Neuhauser’s Tim Zimmermann emerged as the winner in a huge scrap for fifth place, with sixth going to Robert Shwartzman.

Shwartzman’s teammate David Beckmann had started eighth, but stalled on the grid, being miraculously avoided by several cars before his F4 machine finally got going.

Despite that, the Mucke driver brilliantly recovered to seventh, passing the likes of Mattia Drudi, Janneau Esmeijer and Joseph Mawson, who completed the top ten.