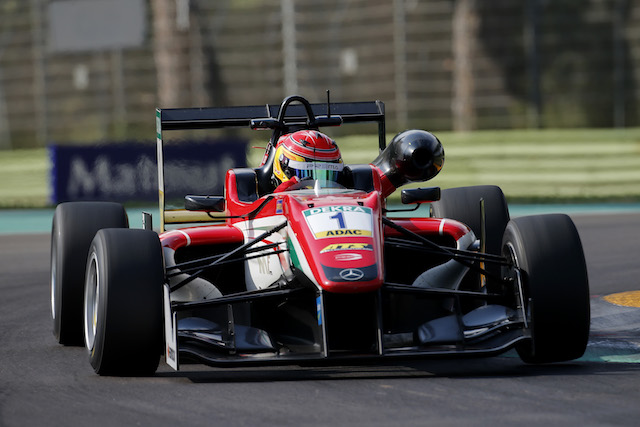 Lance Stroll wrapped up the FIA Formula 3 European Championship title in style with victory in the second race at Imola.

Stroll had been reinstated to pole position having originally had it removed for an alleged track limits offence, and retained the lead at the start ahead of Joel Eriksson.

The Canadian had three safety car restarts to deal with during the race but was never challenged at any of them, allowing him to claim his 10th win of the season and secure the title.

His advantage was only 86 points over rival Maximilian Gunther coming into the race, with 100 still available after it, but the German?s woeful weekend continued.

He had originally qualified fifth and fourth on the grid for the two Sunday races, but was excluded over a failed air restrictor test.

Gunther?made progress early on but later crashed heavily into the barriers exiting the final corner, triggering the second of the two safety cars.

Stroll?s domination of the race was aided by Eriksson and George Russell fighting over second for the majority of it.

Russell claimed second place from the Swede at the start of lap two, but Eriksson would take it back soon after the second safety car restart, replicating the outside pass at Tamburello that his team-mate Niko Kari used to beat Stroll to the race one win.

Ralf Aron finished in fourth place. Sergio Sette Camara, who was fastest in qualifying, fought his way up to fifth but later ran wide at Rivazza and fell down the order.

Ben Barnicoat and Mikkel Jensen could have benefitted from that had they not forced each other wide through the gravel on the second restart.

Instead it was Guan Yu Zhou who came through to fifth in front of Anthoine Hubert and Nick Cassidy.

Callum Ilott had dropped to the back early on with an apparent problem before ending up in the gravel to cause the first safety car, while David Beckmann crashed out to trigger the final caution.