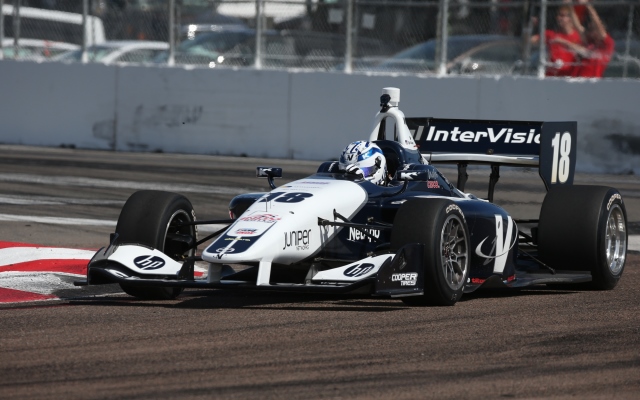 Kyle Kaiser picked up his first career Indy Lights pole position at St. Petersburg, and will lead the field to green in Saturday’s first race of the season.

The?20-year-old Juncos Racing driver was the first driver of the day to set a lap in the 1m05s range. His fastest lap of a 1m05.873s was quick enough to edge out the reigning Formula 3 champion of Europe,?Felix Rosenqvist, who qualified second for Belardi Auto Racing.

Kaiser’s only front-row start last year came in the season finale at Mazda Raceway Laguna Seca, where he started second.

Rosenqvist was the fastest man in both Friday practice sessions, and the only other driver to turn a sub-1m06s lap time in qualifying, as the session was red flagged with under three minutes remaining due to a crash involving?Dean Stoneman.

Stoneman had struggled with traffic all session and was on his first clean lap when he struck the tyre barrier at turn eight, causing the session-ending red flag. The ex-Red Bull Junior Team driver will start a disappointing 13th on the grid for the first of two races this weekend.

Zach Veach qualified third in a solid return to Indy Lights after a year’s absence.?Shelby Blackstock?qualified a career-best fourth, despite an incident midway into the session that damaged his nose assembly. Completing the top five was?Scott Hargrove of Team Pelfrey.