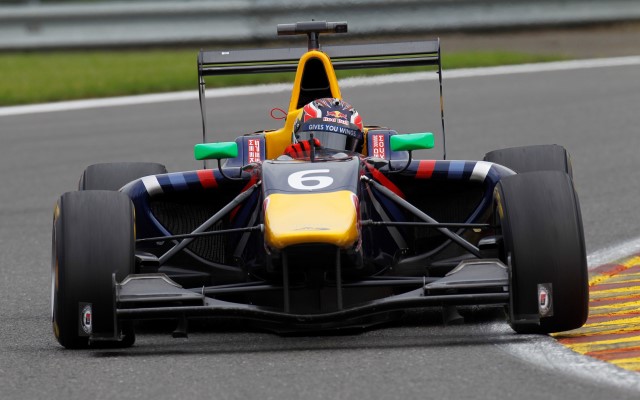 Daniil Kvyat got the jump on Red Bull stable-mate Carlos Sainz to score his first win in GP3 in a Spa-Francorchamps race punctuated by three safety periods, including one for a major crash involving Sainz and Jack Harvey.

Erstwhile championship leader Tio Ellinas stalled at the start and dropped down the order as Kvyat got a better launch than pole-sitter Sainz to take the lead at La Source, followed by Conor Daly.

The safety car was called for on the opening lap after Josh Webster was run into by Emanulele Zonzini at the first corner. Once the race was restarted there was another incident at the same place, this time after Adderly Fong dreadfully misjudged an overtake and outbraked himself, slamming into Patric Niederhauser and causing another safety car.

There were then some laps of green flag racing until lap ten when Sainz and Harvey collided as they fought over third place. Harvey was trying to pass the MW Arden driver into Les Combes but moved across on him and caused contact that sent his car into the barriers on his right-hand-side before bouncing across the track and hitting the barriers on the other side in an impact strong enough to tear the rear axle away from the car. Harvey was able to step out of the car seemingly unharmed, but it took until the final lap of the race to clear the two cars.

The safety car came in at the final lap, as Kvyat took victory ahead of Daly and Facu Regalia, who has moved into the championship lead as a result of Ellinas stalling. Kevin Korjus was fourth ahead of Alexander Sims on his first appearance for Carlin, with new team-mate Nick Yelloly one spot behind.

Melville McKee made a number of places during the race to finish seventh, while Ellinas recovered to a fine eighth after making a pass on Robert Visoiu just before the final safety car period. The Cypriot is now set to start race two from pole, giving him the chance to reclaim the points lead from Regalia who will start sixth.