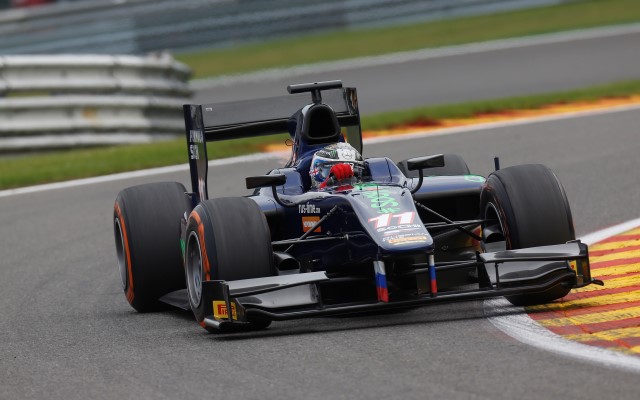 Sam Bird took a commanding victory in the GP2 feature race at Spa-Francorchamps, going largely unchallenged after starting on pole.

The only real threat to Bird came at the start, when third-placed starter James Calado got a better launched and edged ahead on the run down to La Source, only to go deep on the outside and allow Bird to keep first place on the inside.

Bird stayed out longer as those behind him made their pitstops but rejoined after his stop with a healthy advantage, finishing up seven seconds clear.

Calado was one of only a few to start on the option tyres and found himself slipping back behind front row starter Fabio Leimer before coming into change tyres on lap seven. That’s when his challenge fell apart, as a slow rear-right tyre change left him stood still.

After starting fourth, Marcus Ericsson slipped behind Alexander Rossi, Jolyon Palmer and Felipe Nasr in the early stages but benefited when Carlin team-mates Nasr and Palmer collided at La Source. Nasr had tried to repeat the late move down the inside of the first corner he had previously managed to pull off with Ericsson, but there wasn’t the space this time and he hit Palmer, ending his own race and dropping the Brit to the back.

Ericsson managed to jump Leimer by staying out a lap later while the Swiss driver had to clear slower traffic. Rossi stopped a further lap later and got ahead of the pair of them, only for Ericsson to drag past the American on the Kemmel Straight.

Rossi would spend the rest of the race trying to re-pass the Swede, but had to settle for third and a first podium since his championship debut in Bahrain in April.

Leimer finished fourth ahead of?Tom Dillmann and Julian Leal, who both made up ground by staying out until after Bird had stopped. Stephane Richelmi finished seventh ahead of Calado, who salvaged the reverse grid pole for Sunday’s sprint race. Robin Frijns was ninth on his return to action with Hilmer, one spot ahead of the man who had replaced him in Hungary, Adrian Quaife-Hobbs.

After starting 20th, championship leader Stefano Coletti made up a number of places during his first stint, running ahead of Dillmann when he stopped. After a slow tyre change he rejoined ahead of Calado, only for the ART driver to pass into Eau Rouge. Dani Clos then tried to pounce, but ran into the back of Coletti on the exit of Radillon. He lost his front wing and picked up a drive-through penalty, while Coletti appeared to sustain damage and slipped to 13th.

Coletti retains the points lead with him and Nasr failing to score, but only 14 points now separate them, Leimer and Bird.

Maranzana takes one pole away from Cammish at Knockhill