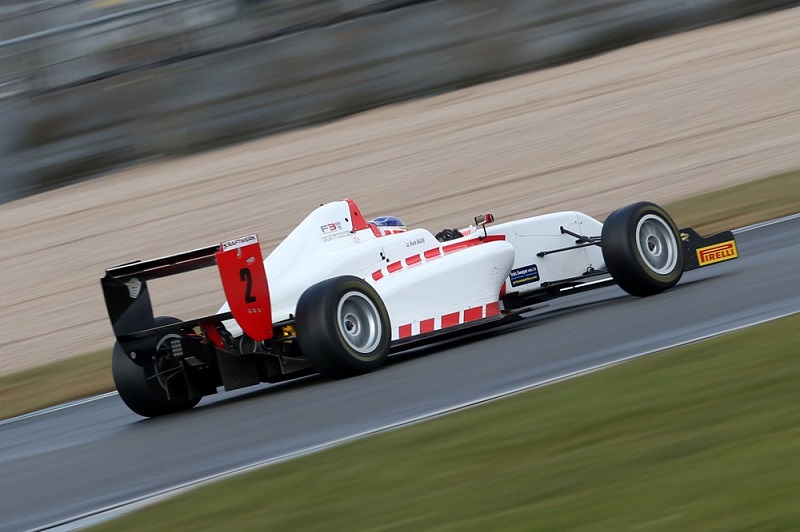 Kush Maini was fastest of the 16 drivers taking part in the on-track testing at the BRDC British Formula 3 media day at Donington Park, ahead of?2017 Ginetta Junior champion Tom Gamble.

Maini, the younger brother of Haas Formula 1 junior Arjun, set the quickest time of the day in the third and final session of the day for Lanan?Racing.

He posted a 1m24.523s, which was over six tenths quicker than that of Fortec Motorsport driver Gamble’s best effort. Double R Racing’s Linus Lundqvist rounded out the top three, less than a tenth back.

Nicolai Kjaergaard, who last year finished 10th in his maiden BRDC F3 season, topped the second session of the day and ended the day with the fifth quickest time.

Billy Monger, who is evaluating a return to single-seaters full-time after his horrific incident at Donington last year, was sixth quickest overall, adapting seamlessly as the conditions changed over the day from cold and wet to slightly warmer and drier.

Fortec Motorsport’s?Tristan Charpentier was seventh on the timesheets, while?2017 BRDC British F3 race winner Krishnaraaj Mahadik, who was confirmed by Double R Racing on Wednesday, completed the top eight.

Harry Webb topped a rain-affected first session for?Chris Dittmann Racing but was shuffled down to eleventh position overall by the end of the day.

Pavan Ravishankar spent the majority of the opening session in the garage but recovered to 12th position by the end of the media day.

Karting graduate Joshua Mason split the Hillspeed duo of Jusuf Owega and?Ben Hurst in 15th. Hurst caused the first red flag of the day when he spun into the gravel with less than half an hour remaining of the second session.

Owega also visited the gravel, bringing out another red flag with just minutes to go in the final session of the day.