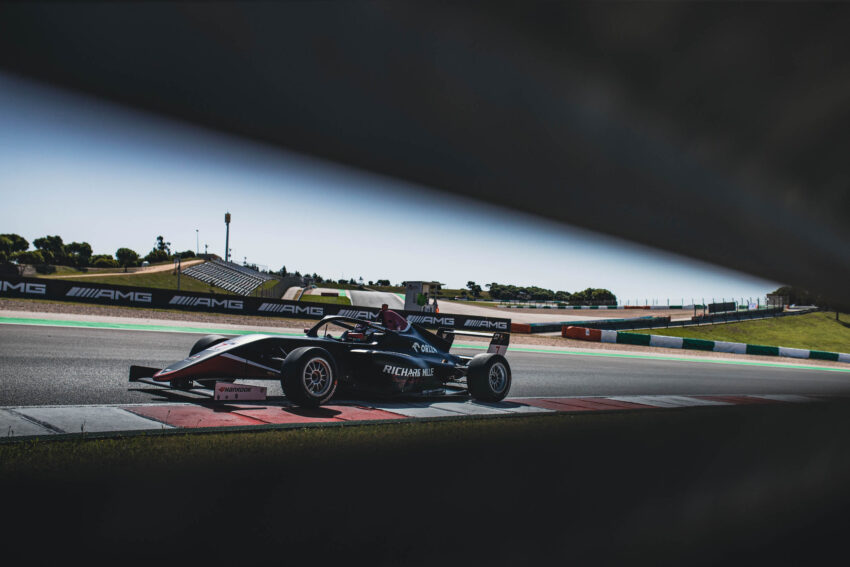 Tymoteusz Kucharczyk saw off Nikola Tsolov to take his first car racing win in the opening race of the Spanish Formula 4 round at Jerez.

From pole position, Alpine Academy affiliate Tsolov retained the lead over Richard Mille Young Talent Academy winner Kucharczyk into the first corner, but Kucharczyk challenged alongside Tslov through the following corners before eventually snatching the lead. Kucharczyk’s MP Motorsport team-mate Valerio Rinicella then took second from Campos driver Tsolov down the back straight.

Behind the leaders there was carnage on the opening lap, including Sebastian Gravlund being pitched into the gravel trap and a sizeable coming together between Alvaro Garcia and Ricardo Gracia.

After the subsequent safety car, 10 minutes remained on the clock at the restart, and Tsolov found a way back past Rinicella for second place a few minutes later.

The Bulgarian then quickly closed the gap to the leader and the pair were side-by-side down the pit straight as they started the final lap. Kucharczyk held on though by 0.349 seconds.

He moves into the points lead after both Tasanapol Inthraphuvasak and Hugh Barter finished outside of the points. Having already qualified 11th, Inthraphuvasak ran wide through the gravel on the first lap before recovering to 12th, one place behind Barter who fell back from fourth on the grid.

Charlie Wurz climbed from seventh to fourth on his series debut with Campos Racing, overtaking team-mate Georg Kelstrup after the restart. Kirill Smal finished just behind Kelstrup and ahead of Robert de Haan, Filip Jenic, Gael Julien and Christian Ho.