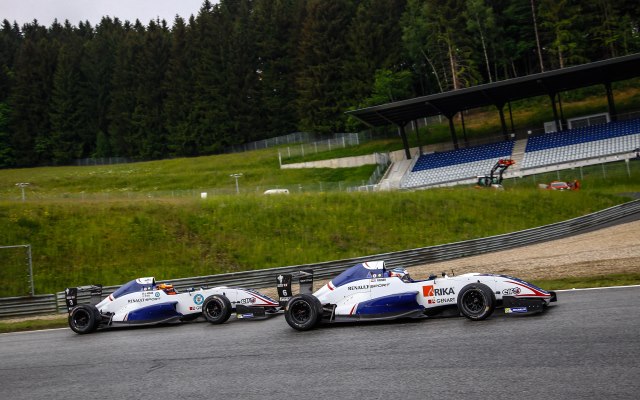 Koiranen has announced it has withdrawn from Formula Renault 2.0 competition, having taken double Eurocup and Alps series titles for two consecutive years.

The Finnish-owned outfit had been missing from the post-season Eurocup tests at Aragon and Paul Ricard and has now made its withdrawal official.

The operation will focus on its programmes with GP3 and FIA Formula 4 in 2016.

GP3 introduces a new car for next season, while Koiranen has added a second centrally-run F4 series in Spain to the one it ran in the Northern European Zone with SMP backing in 2015.

It first won the Eurocup in 2010 with Kevin Korjus, and scored the 2011 NEC and 2012 Alps crowns with then-Red Bull Juniors Carlos Sainz and Daniil Kvyat respectively.

“We have proved in few years only to be a very strong competitor in the category,” said Koiranen CEO Afa Heikkinen.

“Today, we are ready to take new challenges and aim for new titles.”

Executive director Alexandra Consani commented: “Our decision to extend our operations in the new FIA F4 categories is to continue teaching young drivers through a very good frame designed by the FIA to allow cost-effective equal chances for everyone.”

There’s no other way of putting it: Losing Koiranen is a big blow for Formula Renault 2.0.

Having a choice of reputable teams is an important factor for top drivers in choosing championships, and FR2.0 has now lost its leading outfit.

It’s not all doom and gloom, though. The recent arrival of Lando Norris – who could have chosen to race anywhere – proves that FR2.0 is still attractive to the quickest and most well-funded of drivers.

And so it should be. Having pulled its backing from the 3.5-litre series, Renault is now putting its full focus in terms of junior single-seater championships – for now at least – onto 2.0. That includes giving it a prestigious Monaco Grand Prix support slot.

It still makes plenty of sense as a series to compete in. Drivers have been flocking to Formula 3, but as this year showed, many are under-prepared.

Koiranen might have pulled out of FR2.0 and prioritised FIA F4 and GP3 – potentially with one eye on plans to enter the GP2-promoted F2 – but it has now removed a route for drivers to be able to move between those two categories. It’s ironic that the team has literally just announced an FR2.0 graduate as its first GP3 driver for next year.

In recent seasons, FR2.0 has quite possibly been too competitive, with good drivers languishing down the order – but it is in danger of doing too far the other way.

Hopefully more drivers will follow the lead of Norris in choosing FR2.0 and taking their careers one step at a time.