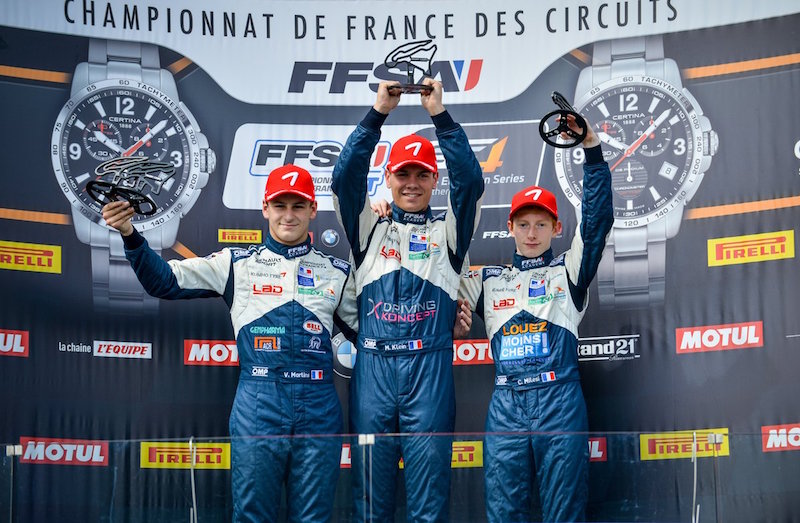 Marvin Klein, Stuart White and Charles Milesi shared the wins as the French Formula 4 Championship resumed at Magny-Cours after a two-month break.

Victor Martins was on course to boost his title bid with victory in the final race of the weekend, but was passed by fellow karting graduate Milesi with five minutes remaining.

White had started the finale on pole after setting the fastest time on a drying track at the end of qualifying, but he was rounded by both Martins and Milesi on the way into the Adelaide hairpin for the first time.

After emerging from the turn ahead, Martins was able to build a margin of more than a second over Milesi, but three consecutive fastest laps in the middle of the race from the latter brought the gap back down to half a second.

Milesi, who was forced to miss the Spa round due to illness but took two top 10 finishes on his Formula Renault Eurocup debut at Paul Ricard two weeks ago, got even closer on the next lap, and then switched from the outside to the inside of Martins into Adelaide to snatch the lead, going on to win by half a second.

After losing the lead, White spent the rest of the race with the trio of Hugo Chevalier, Christian Munoz and points leader Arthur Rougier on his tail but managed to hold on to finish third, some nine seconds behind the winner.

Rougier got fifth on the penultimate lap after passing Munoz to leave Magny-Cours with an advantage of 28 points over Martins, having arrived with a 36-point advantage.

Martins had started the first race of the weekend from pole position based on second-fastest times in qualifying, but on a damp track he slid wide through the long Estoril right-hander on lap one.

That allowed both Rougier and Munoz past into Adelaide, although he would re-pass Colombian Munoz on lap four.

It was Marvin Klein who excelled in the conditions however, passing Munoz and then Martins in consecutive laps before getting alongside Rougier.

Klein then took the lead away around the outside of Estoril for his maiden win.

Rougier was shuffled back from first to fourth in one lap behind Martins and Milesi.

Only 13th on second-fastest times in qualifying, White worked his way up to seventh in the opening race, and in race two he went from fourth on the reversed-grid to claim the led by the time the field exited Adelaide.

He took the win by 0.8 seconds over Milesi, who charged from eighth on the grid, beating Chevalier to second.

Rougier was again fourth, while Martins finished a lap down after making contact with Klein through Estoril for the first time.

Klein was tagged sideways across the track, dislodging Martins’ front wing and being relegated to the back.

Martins did not initially appear to suffer from the damage as he worked his way up to eighth place, but it later got worse, causing him to go wide through the gravel on the outside of the first corner before he pitted for a replacement.

This year’s French junior karting champion Pierre-Louis Chovet made his car racing debut but ended up excluded from the finale after not serving a drive-through penalty awarded for a jump start in race two.