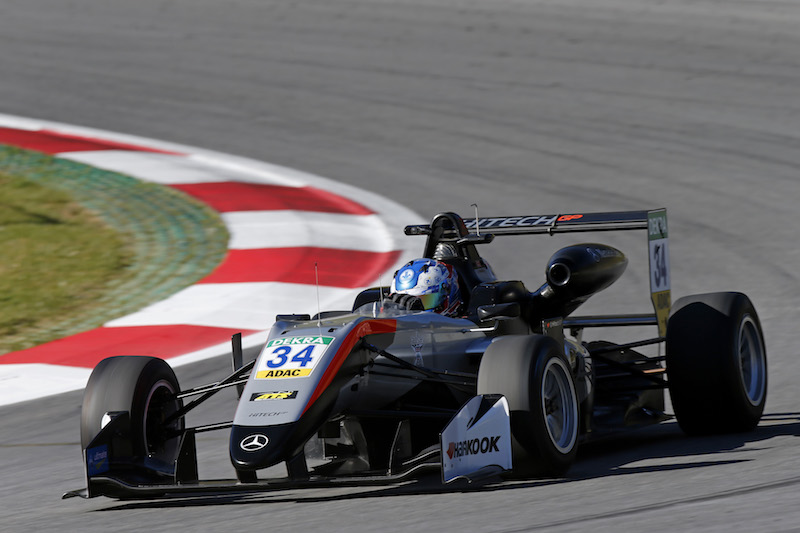 Jake Hughes claimed his first win in Formula 3 from pole position in the second race at the Nurburgring, holding off European Championship leader Lando Norris.

Hitech GP driver Hughes, starting from pole position for the second time this season, led every lap en route to his first victory of the season.

In the first competitive dry running of the weekend for the F3 cars, Hughes nailed the start.

Norris worked his way past race three polesitter Callum Ilott on the third lap of 26. He then held back before starting to make his charge to catch Hughes.

The McLaren junior was the only driver to lap in the 1m21s as he chased down Hughes, and would be right on his tail until the chequered flag, with Hughes winning by a margin of just 0.539s.

Twelve seconds down the road, Ilott held off Tadasuke Makino for the final spot on the podium.

Joey Mawson was almost half a minute behind race winner Hughes in seventh, ahead of Harrison Newey and championship contender Joel Eriksson, who?battled from 17th?on the grid to work his way into the points.

Jehan Daruvala held off Nikita Mazepin on the line for the final point, with the two Force India-affiliated drivers separated by less than half a second at the flag.

Maximilian Gunther had a tough race, finishing a lowly 12th and allowing Norris to further increase his championship lead.

Max Defourny and Sacha Fenestraz, both making their European F3 debuts at the Nurburgring, were involved in an entertaining fight for 13th. Fenestraz came off the best after Defourny ran onto the still-wet astroturf.

Marino Sato was the only retirement, following a collision at the NGK chicane with Keyvan Andres early in the race after losing the rear end of his car.