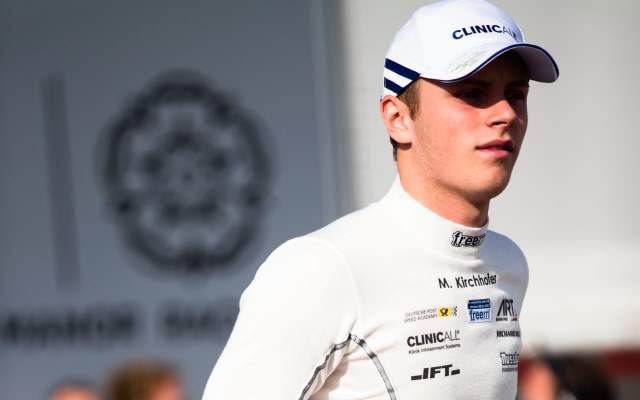 Marvin Kirchhofer will contest the next round of the British F3 series at Silverstone in place of Sam MacLeod at Fortec Motorsports.

MacLeod won twice from a depleted seven-car field at the opening British F3 round at Rockingham, but will be absent from Silverstone next weekend due to a clashing date in the German F3 Cup at Lausitz.

His place will be taken by the reigning German F3 champion Kirchhofer, who is racing in GP3 this year. He took two fifth-place finishes from the opening round of that series in Barcelona last weekend.

Kirchhofer previously tested with Fortec’s F3 team at the end of 2013, and will use his appearance as a chance to stay race-fit in a six-week gap before the second GP3 round in Austria and to gain experience at Silverstone ahead of the UK GP3 date in July.

It won’t be his first time at the circuit though, having tested a Formula Renault car there in March at the same time as fellow hot prospects Max Verstappen, Esteban Ocon and Antonio Fuoco.

Kirchhofer will partner Martin Cao – who leads the British F3 points after a trio of second-places at Rockingham – and Matt Rao, who won race three when MacLeod crashed out at the start.

“I’m really happy to be back racing with Fortec Motorsport – and after a good test in 2013 I’m optimistic to race for the win at Silverstone,” he was quoted as saying by Autosport.

“It’s a great opportunity for me, getting some experience at Silverstone and trying to improve myself with a bit more racing.”

Fortec team manager Dan Mitchell said: “We are very happy to have Marvin on board. He’s a proven race winner and can hopefully continue this with us at Silverstone. He’ll be a great benchmark to our drivers and a good asset to British F3.”