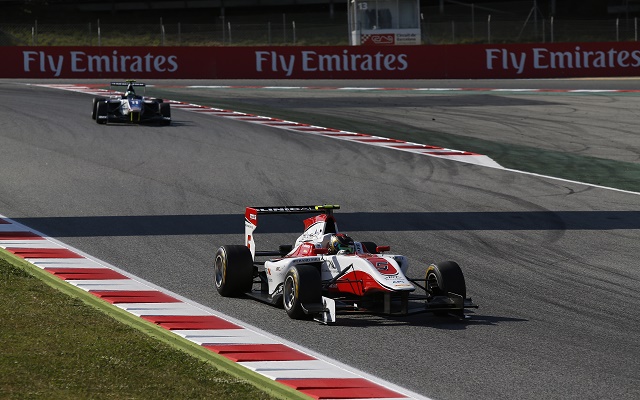 ART Grand Prix’s Marvin Kirchhofer took his second victory in the GP3 series in race two of the first round of 2015 at Barcelona.

One of the pre-season favorites, Kirchhofer was only fifth in race one, but made the most of fourth on the grid to become ART’s second race winner of the GP3 opener.

It was a good start off the line by Italian polesitter Antonio Fuoco, who battled his way from 21st to eighth in yesterday’s first race.

But Kirchhofer’s getaway was the real eye-catcher, the German right on the tail of Fuoco into T1 after clearing both Jimmy Eriksson and Kevin Ceccon.

And when Fuoco ran wide into the third corner, Kirchhofer eased past him, taking the race lead that would be his for the rest of the distance.

Eriksson, who was off to a slow start but held on to third by bravely sticking to the outside line, took a lap to catch Fuoco and passed him in the beginning of lap two.

But a victory bid for the Swede was seemingly ouf of the question, with Kirchhofer into a four-second lead after three laps.

As the German managed his advantage, Eriksson was then reeled back in by Fuoco, but held off his advances to finish second.

Fuoco himself came under immense pressure from Arden’s Emil Bernstorff and charging teammate Jann Mardenborough in the final two laps.

And, as Fuoco forced Bernstorff to the side on the last lap, Mardenborough snuck past both of them on the inside to claim the final podium spot. His Italian squadmate had to settle for fourth, while Bernstorff took fifth.

Ceccon held off race one winner Esteban Ocon to finish sixth, while Trident’s Luca Ghiotto completed the points-scorers in eighth.