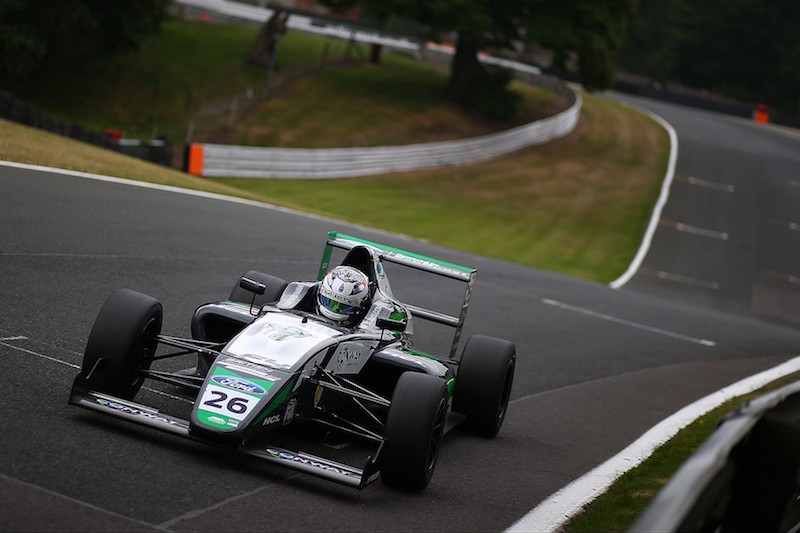 Kiern Jewiss took the lead of the British Formula 4 standings at Oulton Park despite being stripped of one win following a clash with Red Bull Junior Dennis Hauger.

First year single-seater racer Jewiss had taken double pole position in commanding fashion in qualifying, but made a slow start to the first race as Hauger and Patrik Pasma swept past.

After passing Pasma on lap two, Jewiss set after Hauger, catching the Norwegian and then remaining on his tail until the penultimate lap when the pair made contact at Island Bend.

Jewiss emerged with the lead and won the race, but received a three-second penalty for ‘driving in a manner incompatible with general safety’ that relegated him back to second and gave Hauger a long-awaited maiden win.

He was pushed all the way by Doohan, while Jewiss overtook both Pasma and Tonteri to make it back onto the podium in third.

Double R driver Jewiss was dominant in the third and final race, winning by 7.776 seconds.

Finns Pasma and Tonteri completed the podium, with Hampus Ericsson and Hauger continuing the Nordic theme in fourth and fifth respectively.

Simmons finished in eighth position, with a clash with Johnathan Hoggard dropping him behind JHR Developments team-mate Manuel Sulaiman, although both gained a place when Hoggard later retired.

It means Jewiss leads Simmons by 16 points, with a further 53 back to third-placed Doohan.