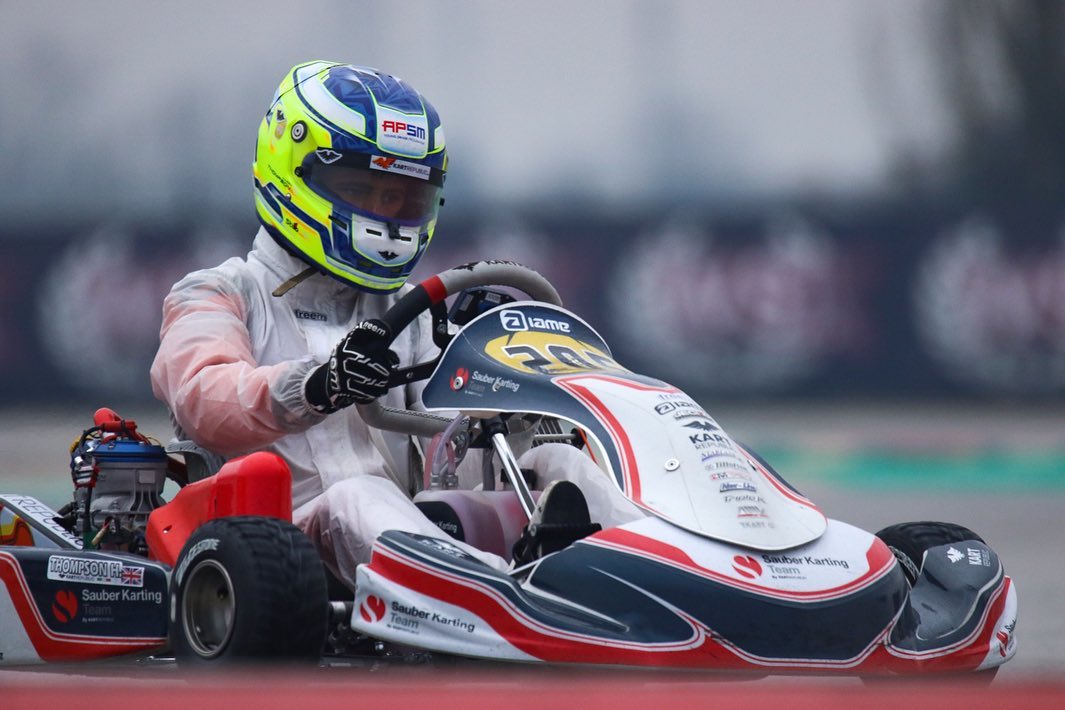 Both made their debut with Sauber, which is behind the Alfa Romeo Racing Formula 1 entry, in last weekend’s WSK Champions Cup event at Adria in Italy.

Thompson announced late last year he was leaving Red Bull – who he won two German kart titles with during his two-year spell as a junior – to switch to shifter karts with Dino Chiesa’s Kart Republic manufacturer.

The 15-year-old actually competed in the OK classification at Adria, and finished third in the final behind Nico Rosberg protege Taylor Barnard and SMP Racing junior Kirill Smal.

Mercedes F1 junior Andrea Kimi Antonelli made his OK debut in the event with the factory Kart Republic team, setting the fastest lap of the weekend in qualifying, dominating his first heat but then missing the rest of the event after falling ill.

Brazilian talent Costa entered the Mini classification of the Champions Cup, and made it to the pre-final.

“I think it’s a good thing that F1 teams are investing in karting and helping young drivers climb to the top of the pyramid,” said Kaell.

“In 2018, the creation of the Rosberg Racing Academy with KR chassis and IAME engines left its mark on people’s minds.

“At the beginning of 2019, when the Sauber Junior Team wanted to get involved in karting, Dino Chiesa immediately told me about it. I met with Frederic Vasseur and Alessandro Alunni Bravi, two people I had already known for a few years.

“By the time we got everything in place, we missed the first preparatory events, but we were ready for the first European Championship competition in Angerville. On this occasion, Sauber junior Dexter Patterson won the Final.

“Overall, it was a good first year of collaboration. We also ran the Swiss driver Joshua Dufek, who made great progress in 2019. He will be racing in a single-seater next year.

“Christian joined at the end of the season in OK Junior. We also closely followed the promising Briton William Macintyre, who competed in the Mini class and is about to enter the OK-Junior category.

“2020 is looking very promising, and we will have a solid team to face the new season.

“Although I am mainly assigned to Sauber, I have many discussions with Dino Chiesa on all the other subjects: equipment, technique, strategy, driver management, etc.

“There is a great dynamic at the moment with all the teams working under the colours of Kart Republic and using KR chassis and IAME engines. In the end, everyone progresses and the drivers all have something to gain.”

It is currently unclear what Sauber’s presence in junior single-seaters will be in 2020, having supported teams in Formula 2, Formula 3 and Formula 4 last year.