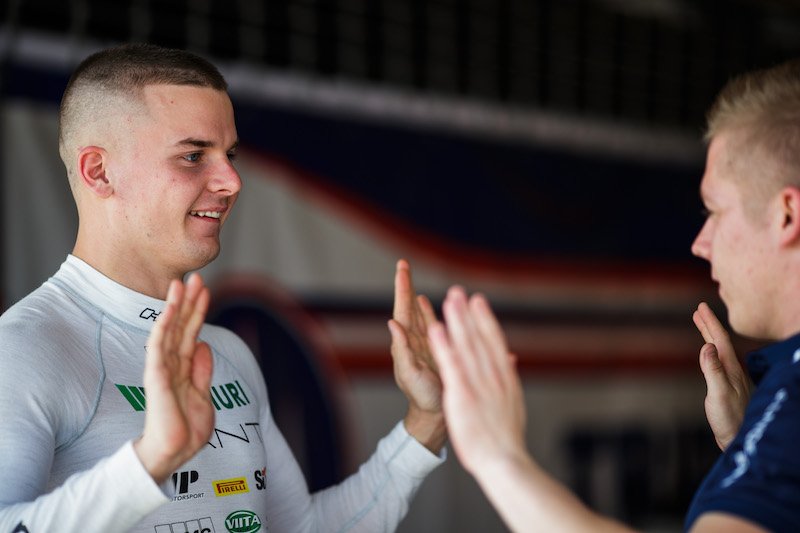 Niko Kari and Jehan Daruvala led the way again on the second day of the final GP3 test in Abu Dhabi.

Following his late-season Formula 2 cameo, Kari continued his GP3 comeback for a second day with the Trident team and topped the morning session with a 1m54.683s, eight tenths of a second off his Wednesday best.

After switching from MP Motorsport to Campos for Friday, Daruvala traded places with Kari through the morning and finished it only six thousandths of a second slower.

The Indian, linked to a Prema seat in FIA F3 for 2019, then led most of the afternoon session, reclaiming top spot with five minutes to go with a lap of 1m54.753s.

Richard Verschoor, back in action with MP after sitting out day one, was second fastest in the afternoon, 0.046s behind Daruvala, and third overall.

Logan Sargeant was the only other driver to get into the 1m54s during the day, the Formula Renault graduate placing third in the morning after switching from MP to join Kari at Trident.

It was a strong day for Campos, with Alex Peroni and Linus Lundqvist joining Daruvala in the top five in the morning, and Lundqvist later improving his time to be third in the afternoon.

Oscar Piastri moved from Trident to Jenzer and was fourth in the afternoon, two places ahead of team-mate and Honda junior Yuki Tsunoda, with Devlin DeFrancesco in between them after remaining with Trident.

Sargeant and Kari were seventh and eighth ahead of the day’s fastest debutant Lorenzo Colombo, the Formula Renault racer linking up with MP Motorsport.

Champions ART had a low-key day, with Christian Lundgaard setting its best time for seventh in the morning and 11th overall.

Enaam Ahmed joined Lundgaard, Max Fewtrell and Felipe Drugovich at the team for his GP3 debut and was 19th in the morning and 20th in the afternoon.

Other newcomers included Robert Shwartzman at Charouz and Yifei Ye at MP, 13th and 14th fastest respectively in the afternoon session.