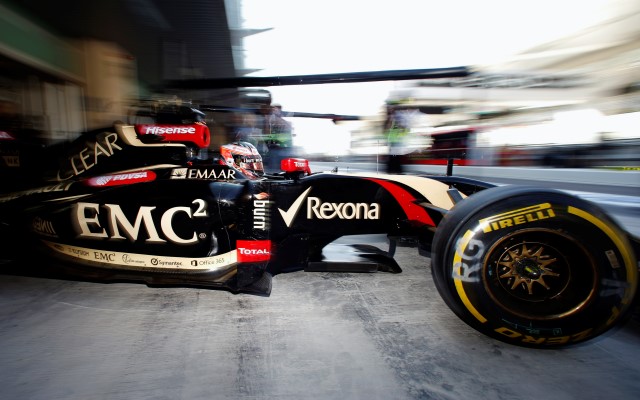 Numerous stars of junior single-seater racing in 2014 will take part in this week’s Formula 1 test at Yas Marina after the season-ending Abu Dhabi Grand Prix.

The champions of GP2 and Formula Renault 3.5 will both be in action. Jolyon Palmer will make his F1 test debut for Force India on Tuesday, when Carlos Sainz will conduct his prize of one day testing with Red Bull for winning the FR3.5 title.

The Spaniard previously drove for the Red Bull team at the young driver test at Silverstone in July 2013, and is now believed to be favourite for the available 2015 race seat at Toro Rosso.

They will be joined on track by the winner of the FIA F3 European Championship,?Esteban Ocon, who will follow up his free practice run with Lotus last Friday with a full day’s driving. He is set to remain in Abu Dhabi to do all three days of GP2 testing from Thursday to Saturday ahead of a likely move to the series for 2015.

Stoffel Vandoorne, fresh from securing second place in the GP2 standings at the end of his rookie season, will do both days of running for McLaren as the team gives the first proper test to its new Honda engine. His Ferrari counterpart Raffaele Marciello finally gets his maiden official F1 test with the Scuderia.

Felipe Nasr, who finished third in the GP2 standings, will complete his duties with the Williams team rather than make his debut for Sauber, who have signed him as race driver for 2015.

Ocon’s F3 rival Max Verstappen will do both days of the test for Toro Rosso as he continues his preparation for his 2015 race drive, following practice outings at Suzuka, Austin and Interlagos.

Former F3 star and current DTM ace Pascal Wehrlein will get to drive the dominant 2014 Mercedes car in place of champion Lewis Hamilton. It will be Wehrlein’s first official test with the team after they named him their reserve driver earlier in the year following a run in an older car in Portimao.

Formula Renault 3.5 race winner Will Stevens will continue with the Caterham team after a solid race debut in Abu Dhabi.

The talent on show in this week’s test is pretty mouth-watering. It’s rather ironic that so many deserving young drivers are being given their chance now that the annual young driver test doesn’t exist. Those events often saw top teams running experienced testers, and the smaller teams selling their seats to the highest bidder.

But the vast majority of drivers taking part this week are fully deserving. Only one team, Sauber, will not be running a driver with no more than one F1 start under their belt. And all the others are running a driver who won races this year in GP2, FR3.5, F3 or DTM.

This is perhaps down to timing more than anything. More than ever, the top Formula 1 teams have got talented, successful young drivers on their books. Mercedes, Red Bull, Ferrari, McLaren and Lotus had very little choice other than to give their top proteges their chance after strong seasons.

But, the scrapping of the old young driver rules has also meant that there is more to lose for teams that take on lesser drivers in return for cash. Previously, when forced to run a rookie, teams took money in order to make it worth it for them. Now, they could be running experienced race drivers, and so taking a less capable driver would be even more of a penalty.

Another crucial thing is the date of the test. The best time of the year to have a test in order to have young drivers taking part is now. Their seasons have finished, they won’t be distracted from their main focus, and they can be rewarded for good performance and meeting their targets. Other vital factors are that the cars are at the end of their development, and the fact that race drivers want to go on off on their holidays. Time pressures are tough on the teams at this end of the season, but such an occasion needs to be preserved regardless of how the calendar looks.

Perhaps the one sad thing is that Marussia can’t be there to give Dean Stoneman the test he would have won for being their GP3 team’s top performer. It would have been quite a story, on the track where he made his debut for Williams four years ago, in his last action before his career was turned upside down…