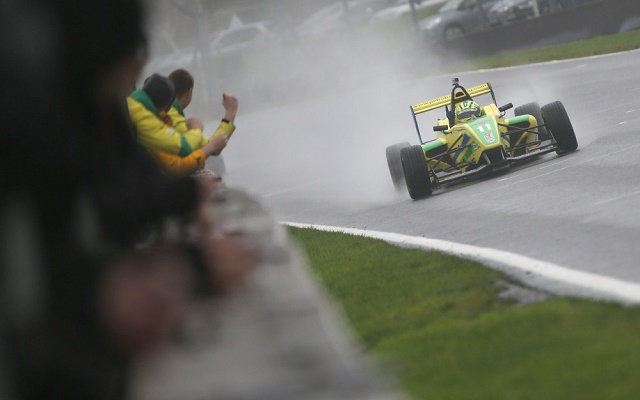 Brazilian racers Gaetano di Mauro and Enzo Bortoleto will continue in BRDC F4 in 2015, having signed with countrymen PetroBall.

Di Mauro, 18, made his graduation to cars in 2013 in the Brazilian Sprint Race series, where he took the title.

He moved to European racing in 2014, joining PetroBall in the BRDC F4 series. He enjoyed a breakthrough in round five at Silverstone, claiming his first podium in the series, before taking a maiden win at Brands Hatch on his way to eighth in the standings.

He was a title contender in the BRDC F4 Winter Championship, winning twice and finishing on the podium in every race but one, in which he got taken out. With two wins overall, he eventually claimed runner-up.

“It’s been a good year for me. I learned a lot and the team have supported me all season,” recounted di Mauro. “We moved on and had a very successful Winter Championship and I was really happy to take second place. We will move forward for next year and I expect to be fighting for the title, but I expect it to be very close again.”

Bortoleto, 16, raced in two rounds of the F4 Sudamericana series in 2014, finishing on the podium twice, before moving on to the BRDC F4 Winter Championship. He secured a front row start at Brands Hatch, but had an incident and slipped down the order. He finished eighth overall, with a best result of fourth.

“I learned a lot in the Winter Championship and it is great to drive alongside Gaetano in the team,” said Bortoleto. “I’m really looking forward to next year. In F4 you get a lot of races in the weekend and the car is good to work with. It’s a great championship with very strong media support, and I think I can aim for podiums and maybe even race wins.”

“We have really enjoyed our first season in the BRDC F4 Championship, it was just as competitive as we expected,” commented team boss Jose Roberto Sabathe. “I know that next year will be very strong, too. I’m very pleased that we can confirm our two drivers so early, and with Gaetano we expect to have a very strong challenge for the title. With Enzo we hope that with our experience and with Gaetano?s help, he can push for podium finishes and wins.”