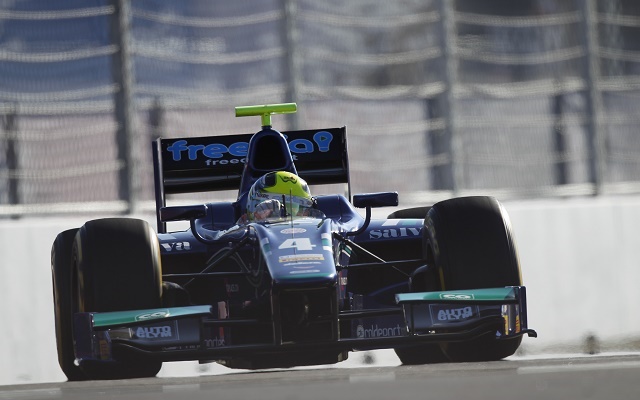 Colombian racer Julian Leal will contest his fifth season of the GP2 series in 2014, staying on with Carlin Racing.

Leal, 24, won the 2008 running of Euroseries 3000’s Italian championship and was a race winner in the Auto GP series later on.

He joined GP2 in 2011 with Rapax, scoring no points in his rookie campaign. He was 21st in his sophomore campaign with Trident, before scoring two podiums on his way to 12th in year two with Racing Engineering.

In 2014, he enjoyed an encouraging start to his partnership with Carlin, scoring two podiums in the 2014 Catalunya opener and sitting in second in the standings after two rounds. However, he would only score 20 points in the remainder of the season and finished the season in tenth.

“I’m very happy to have the opportunity to stay here one year more,” said the Colombian. “From all the teams I have worked with this is the best for me; it?s a team that listens to what you say and follows you and advises you and this is good for me because I can learn a lot in a good environment. I want to start the year as we did this year but then maintain that performance for the whole season. I’m very very happy to be here for another season.”

Leal was partnered by Felipe Nasr in 2014, who claimed four victories on his way to third in the points and will move on to F1 in 2015.

Their combined efforts saw Carlin take second in the teams’ standings for the second year in a row.

“We’re very happy that Julian has decided to stay with us for a second season”, said team boss Trevor Carlin. “Based on the pace we have as a team and Julian has as a driver, together we should have had better results this year. Next year we intend to deliver our full potential with Julian who is a delight to have at Carlin; he is a great team player and great to work with.”

Leal is the second driver to be confirmed for GP2 in 2015 after Arthur Pic announced he would also be staying with his 2014 team Campos Racing.